There has been one thing that has separated the SEC from every other conference over the past 15+ years hasn’t been the coaching. It hasn’t been the fan bases or the fact that “it just means more”. It’s been the athleticism. SEC country is filled with the best collection of athletes in the country. And Jim Harbaugh knows it. That’s why the conference’s coaches complained until they got their rule on satellite camps. But it’s too late. Harbaugh has invaded the South and this 2018 class should show it.

When things are all said and done, this class could very well be one of the most physically impressive classes in program history.

Here’s a little background on how that could all play out:

Though he made a spring game visit to Georgia (the team who looked to be the main competition for UM heading into his decision) the weekend after his trip to Ann Arbor, things looked to be all set for the big quarterback to commit to the Wolverines. But it wasn’t a slam dunk. He actually requested four different commitment edits a week before his commitment. However, he stuck with his lean to the Wolverines and committed with the help of a pretty awesome SBNation video that featured “Hey Joe” by Jimi Hendrix as well as Milton throwing a football that explodes into a Block M. 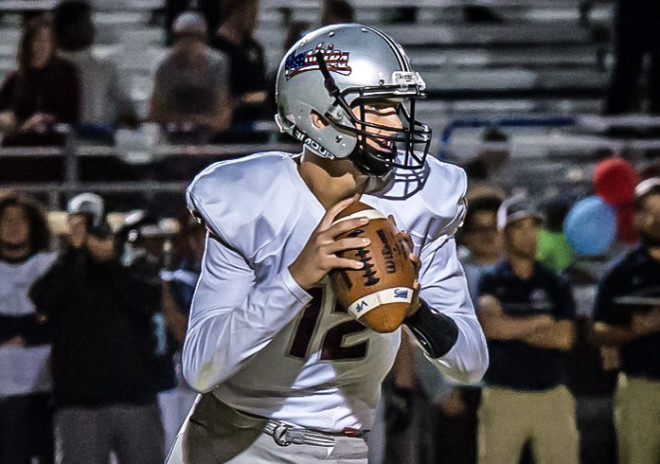 Michigan is clearly looking to take two quarterbacks in this class, and with Milton firmly in the fold, Shough is (by far) the best bet to secure the 2nd spot. Thanks to being a lifelong fan of the Wolverines, his father being from the state, his high academic standing, and his unofficial visit to Ann Arbor earlier this month, things look good for UM here. However, this is far from a slam dunk as he has a very real chance to be the only 2018 QB commit for several other programs, including Georgia, Florida State, Alabama, Indiana and North Carolina. Though he may a top target for some of the higher ranked programs at this time. That’s why I’m sticking with my Crystal Ball prediction here.

Turner burst onto the recruiting scene this winter as he added offers from the likes of Wisconsin, Notre Dame, Tennessee, Notre Dame, MSU and, of course, Michigan’s in the first two months of the year. But it was his first unofficial visit to Ann Arbor on Thursday, April 6th that put the Wolverines out front for good. He committed to UM just days after leaving campus.

Barrett is another Georgian that Michigan looks to be in great shape with heading into the summer. Though he’s a quarterback in high school, his future looks to be at running back and as a wildcat quarterback. Both of which look to be positions of need in this class. According to his interview with Rivals Chad Simmons, Barrett is very high on Michigan, naming it “one of (his) top schools ($). If he’s able to get up to campus this summer or fall, like expected, the Wolverines should be in great shape/

Graham is back on the list for the second month in a row after recently naming Michigan to his top 10. The Swiss army knife-like prospect visited Ann Arbor back in April and reportedly enjoyed it so much that Michigan made a huge move up his list. According to Rivals Chad Simmons’ interview with Graham, UM made a big impact during the visit and is in his top three ($). If the staff pushes for him, there’s a very real chance Harbaugh pulls another talented prospect out of Georgia.

Michigan still looks to be firmly atop Muhammad’s list, even though he’s mentioned his desire to play ball in the SEC. Thanks to the educational opportunities in Ann Arbor, his fit in UM’s offense and the chance to play early thanks to the lack of a tight end in the 2017 class, the Wolverines are still the heavy favorite for the four star tight end.

Hayes is the latest commitment in the class and one that was seen coming from a mile away. He wasn’t extremely high on Michigan’s board early on, Greg Frey’s addition to the coaching staff changed that. And thanks to Frey, Hayes’ first visit to Ann Arbor went so well that the Wolverines became the far and away leaders. And that stayed true all the way up until his commitment over Memorial Day weekend.

Though Faalele has been on the last couple of class predictions, he was one of the last names I added to this list. Michigan is still in good shape here and I obviously think they can get him but they’ll have to really build on the whole “found him” thing. His offer list is now a “who’s who” of national powers and, according to a source, plenty of teams are making an impact. However, if Michigan pushes for him (which I think may be on hold until after the staff sees some real game tape) and can get him on campus for Greg Frey to pitch him on his developmental skills, I really like their chances to land one of the most polarizing recruits in the class. 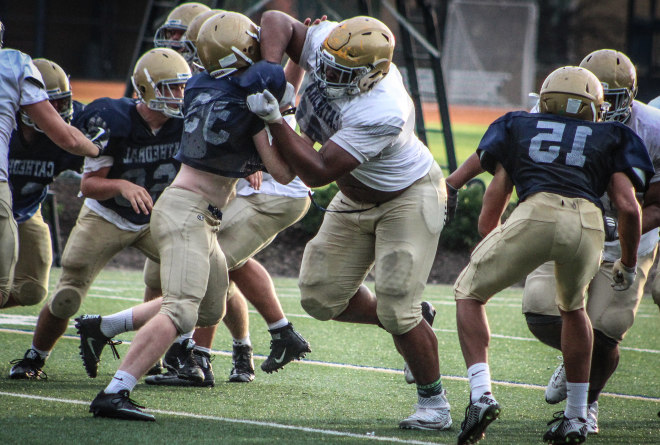 Ekiyor was the second commitment of this class, and like you hear with a lot of longtime commits at one time or another during the cycle, things may not be as strong as they once were. According to multiple reports, including The Wolverines Brandon Brown’s, contact hasn’t been what it once was between the big guard and the staff ($). This may be a recruitment to watch over the summer but, at this moment, I see the staff reaffirming things with Ekiyor and him remaining firmly in this class.

Friday is another top target for the staff and has looked like one of the safer bets for the majority of the cycle up until this point. But, as of late, Penn State and Ohio State look to be making a big push. However, thanks to the longtime recruitment from the staff and the chance to be the only true interior defensive lineman in this class, I still feel good about my Crystal Ball for Friday to Michigan. 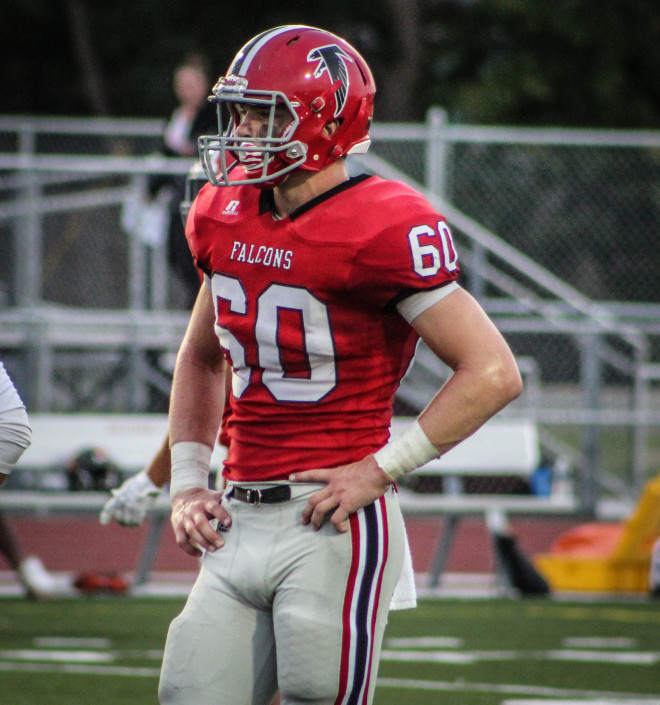 As the son of former Michigan linebacker standout, Chris Hutchinson, Aidan was a player that looked very likely to end up in this class as soon as his name popped up on the radar. Though he didn’t want to be known as a full blown “slam dunk” recruit for the Wolverines, all signs continued to point towards UM heading into his senior year. And he followed through by committing to Michigan in February.

Only going into his junior year, Reese is just scratching the surface as a recruit. Michigan offered him back in April and quickly became the favorite in his recruitment. Thanks to a summer visit, both he and 2017 DT Aubrey Solomon committed to the staff. With Solomon signed, Reese doesn’t look like he’s going anywhere, even though the SEC powers will continue to push from now until NSD.

Notre Dame has made its way into the picture for Simon but things still look very good for Michigan here. He’s been a longtime top target for the coaching staff and looks to be the perfect fit at the safety position in this class. As long the staff keeps its foot on the gas and correctly pitches him, I like their chances to land yet another top recruit out of New Jersey. 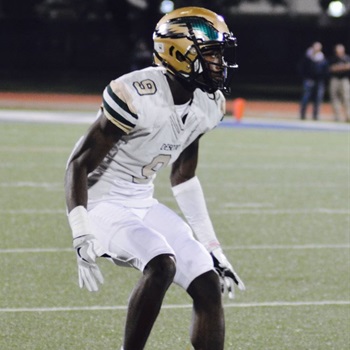 Mentioned for months, by Wolverine247’s Steve Lorenz, as a top target for the staff, Green was a player that looked like he was going to be a very tough pull away from the Longhorn State. That was especially true when TCU offered. The long cornerback prospect was seen as a lean to the Horned Frogs for awhile. But that was until Michigan really started pushing, offered his brother, German, and got the duo up to Ann Arbor for a post-spring game visit. Thanks to the staff’s prioritizing of tall, long defensive backs and their admiration for the three star shown during his first trip to campus, both Gemon and his brother, German, decided to commit to Michigan’s 2018 recruiting class right after their first visit to Ann Arbor.

As soon as the staff flipped the 2017 switch off and flipped the 2018 switch full on, Sims was a priority. But, as a top recruit out of the heart of SEC country, most figured he’d end up staying down south. With the SEC powers, like Alabama, Auburn, and Georgia extending offers, as well as national brand names, like USC, Ohio State, Texas and Stanford throwing their hat in the ring, this was going to take another Nico Collins-like recruiting pitch to win out. And, whataya know, Harbaugh and his staff did just that as Sims committed to Michigan, making him another huge get for UM out of SEC country.

I may be all the way out on a limb by myself on this one but I feel like Michigan’s going to pull a surprise commitment out of this class and Jobe looks like a prime candidate. He’s been a top target for the staff for quite sometime and even though he “shut down his recruitment” earlier this spring, Wolverine247’s Steve Lorenz continues to hear that Michigan is in good shape to flip him after, what is expected to be, a wild recruitment ($). Jobe’s move up to Cheshire Academy (Tarik Black’s high school) could be gigantic for Michigan. We’ll see if it’s enough to receive his LOI on NSD.

If Michigan were to have finished with this score in 2017, it would have had the #10 class in the country, per 247Sports. And though it wouldn’t be another top five class, a top 10 finish would be a nice accomplishment in such a small class following a big, uber-talented class.