It’s the most wonderful time of the year. No, not because everyone’s in a good mood, because we get time off of work, we get to see family and friends from afar, or because the snow outside makes life feel peaceful. None of that.

With the holiday and bowl season comes oodles of travel. It may come on a plane, a train, or an automobile (they should make a movie about that!), but it’s highly unlikely that you’ll be staying in one place this winter. For the numerous college football teams that won enough games to earn a trip to the postseason, they’ll be going with you, most likely in fancy style with Beats by Dre headphones that the bowl game paid for (nope, no room in college athletics to pay players) and not a beat up 2003 Mercury Sable with a dent in the back (that was my ride until my Christmas bonus came in the mail last year).

Holy frequent flier miles. The Big Ten far and away travels more than any other Power 5 conference, accumulating 12,014 total miles (the Pac-12 is closest with 9,454 miles). What’s worse is their opponents have about half the distance, a total of only 5,745 miles. No, there is not an anti-Big Ten conspiracy. Even though there are some gorgeous domed stadiums in the Midwest and relocating some would make sense, it’s more fun for fans to see their team in the sun and escape the gray and 5 PM sundown for awhile. 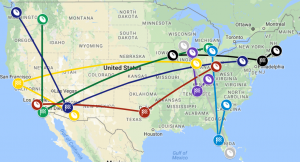 Click the map to go to an interactive map of all the Big Ten’s conference travel.

That said, Wisconsin got hosed. Miami is literally playing a home game.

A little bit of everything here. The team with the longest trip (Oklahoma) also has the second-most favorable difference (896 miles). The Big 12 have the most even travel match-up (41 miles) and the second-most lopsided (1444 miles). Four teams have mileage advantages, the other four don’t. Two teams get to play in their own state (makes sense when the state of Texas hosts what feels like a third of the bowls). 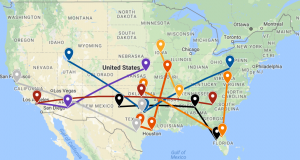 Click the map to go to an interactive map of all Big 12’s conference travel.

The ACC has the shortest cumulative trip of any of the P5 conferences, traveling 5,608 miles this season. If you remove NC State as an outlier, their average trip is shorter than the Big Ten’s shortest trip; like I said earlier, that’s to be expected when these teams play in 70 degrees year-round. Only Miami plays a game in their home state (and Miami plays at their own stadium, I don’t think I’ve mentioned that yet) and more than half the teams face a travel deficit. 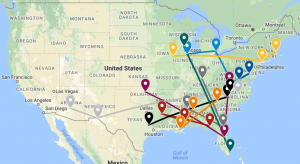 Click the map to go to an interactive map of all of the ACC’s conference travel.

Georgia’s travel alone accounts for more than a third of all of the SEC for the bowl season; remove them and their trips look relatively balanced. They’re still favored in six of their nine games, but the margins are pretty small. This is also the most cumulative mileage that they’ve been forced to travel in my three years recording the information; the conference traveled 3904 miles in 2015 and 5351 in 2016. Cumulative stats are one thing but differences are closer too: the largest difference in their favor is 681 miles compared to multiple thousand mile differences in 2016 and a 2400+ mile difference in 2015. 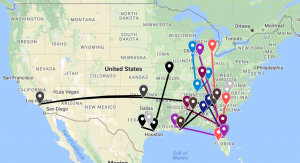 Click the map to go to an interactive map of all of the SEC’s conference travel.

The conference has to go a long way for every game (UCLA’s 374 miles is the shortest), but so do their opponents; on average each opponent has to travel approximately 35% further. They are beneficiaries of the 2nd, 3rd, 4th, and 5th worst differences in this bowl season (Miami, who plays a home game if you didn’t know, has the best difference), and also play the teams with the 1st, 2nd, and 3rd longest trip. But they also average over 1,000 miles per trip, so take these with a grain of salt.  I just can’t wait to see Herm Edwards play. to win. the game. 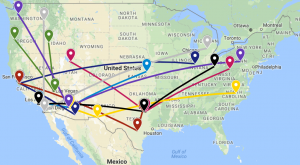 Click the map to go to an interactive map for all of the Pac 12’s conference travel.

And some superlatives for you…

I know I said I don’t use this as a platform to advocate for reform, but since you made it this far, I’ll throw you a bone. I wish the bowl schedule moved away from the designated conference opponents. Keeping the playoff and the NY6 methodology the same, I would like to see each bowl remaining to be granted the ability to pick from a pool of available teams based on attraction of matchups rather than from a particular conference. On paper, there don’t seem to be too many blowouts waiting to happen (I also didn’t think that Iowa would be outscored their last two bowl games 75-19, but hey), but I also think that we are confining ourselves a little bit by forcing certain teams with certain records from certain conferences to play other certain teams with certain records from certain conferences.

That’s a rabbit hole that I’ll fall down on another day. Enjoy bowl season and thanks for reading!