When Jim Harbaugh returned to his alma mater and took over the head coaching job at Michigan, everyone was holding off on engraving the ‘University of Michigan’ into the Dr. Pepper/Draft Kings/Taco Bell National Championship trophy until he found one thing, his next Andrew Luck.

While this is obviously jumping to huge conclusions (right, Tom?), it looks like he just may have found him in his first 2016 commitment, Avon (IN) QB Brandon Peters.

Now, I know this is beyond premature to compare a high school recruit to “the most untradeable player in the NFL”, but whoever Michigan’s quarterback will be under Harbaugh will always be compared to his greatest masterpiece. And for good reason.

The former Stanford standout, 2x Heisman trophy finalist, #1 overall pick in the 2012 NFL Draft, and 3x Pro Bowler might as well have been conceived, birthed and fathered by Harbaugh by the way people tie the two together.

Though the current Michigan head coach did not do any of those things for Luck, he did recruit him in high school and was his key developer throughout his college career. However, what people always tend to forget about developing quarterbacks is the fact that the player has to have the natural talent, mental capacity and driven attitude to succeed.

If those traits are there, Jim Harbaugh can turn them into a legit QB.

While not all of Harbaugh’s pupils had the same specific set of skills (for you Liam Neeson fans out there), Luck was special.

The now Indianapolis Colts superstar was the “total package” as a high school quarterback. On top of being the co-valedictorian of his senior class in 2008, Luck starred on the basketball court, football field and in the classroom. 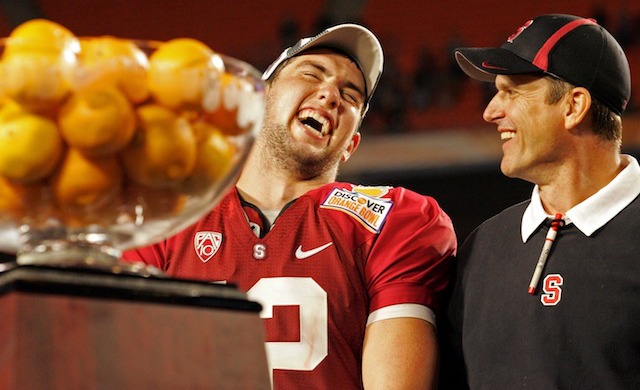 After spending three years together in Palo Alto, Harbaugh did something that Brady Hoke showed is not as easy as most would think. He took a top rated high school recruit and helped develop him into an elite college quarterback and top NFL prospect in just three years working together (see, there’s still time, Shane!).

Here are Luck’s stats in his two years as Harbaugh’s starter:

With that quick history lesson out of the way, the question on every Michigan fans mind is:

Can Harbaugh do the same with Brandon Peters?

That is an answer only future you and I happens to know, but when you compare Luck and Peters statistically and physically, you can see what has the Wolverines fanbase, the Michigan coaching staff, and former NFL quarterbacks so excited.

Good height and is continuing to fill his frame in. Is a good athlete who can run and escape pressure, but he also shows good awareness and feel in the pocket. Gets rid of the ball quickly and has the arm to make throws to the sideline and drive the ball downfield. As he gets bigger and stronger, that should only increase. Smart kid, tough, calm under pressure. Must continue to work on reading defenses and going through his progressions.

Big, smart, athletic, strong armed quarterback that can make all of the throws and shows composure under pressure. I wonder who else had a similar scouting report……

Despite having an odd release Luck shows a good arm and nice accuracy. When he wants to throw with velocity he can put some zip on the ball. When he wants to throw with touch Luck can throw with touch. He also has pretty good mobility and has the ability to evade the initial rush and make a play. Luck can throw on the run, whether it’s rolling to his right or left. He’s a smart quarterback that plays with poise and makes good decisions.

“So, what? Harbaugh has himself another prototypical quarterback. Doesn’t mean he’ll be the next Andrew Luck”. Good point, negative person I hate sitting next to at the bar. But that’s not the only thing that makes the two similar:

Numbers and stats obviously do not tell you everything as you cannot measure future outcomes, opportunities, heart, blah, blah, blah. But, like my friends use to always say about skunked beer in college, it’s better than nothing.

Not sold yet? If you’re more of a visual learner, I believe I can help you out.

Good thing I’m not comparing the quality of video footage and production between 2008 and 2015. How did we ever watch that pixilated mess?

Anyways, after watching both videos, you can see why both myself and Jim Harbaugh compared Peters to Luck in the first place.

Both show the ability to make all of the throws while also showing off that athleticism and composure. It’s like Scout.com has real scouts. Crazy, I know.

If you’re looking for the biggest difference between Harbaugh’s former and future pupil, it’s not on the field or in the classroom. It’s the fact that Andrew Luck was bred to be a quarterback. His father, Oliver, starred at West Virginia before playing five years in the NFL for the Houston Oilers.

As for Brandon, his dad was not a former college standout or NFL quarterback. Peters actually never truly had real quarterback training until this past summer when he spent a couple hours with Harbaugh at the satellite camp and a week with Trent Dilfer at the Elite 11 Finals. Just imagine what he’d look like as a prospect if he did?

Now, I’m not ready to go out on that limb and say Brandon Peters will be the next Andrew Luck just yet. But when you break down their high school tape, their physical attributes and their numbers, you can see why Maize and Blue Nation is so excited for Peters’ arrival this winter.

So, if you’re reading this Mr. Jim Harbaugh (and I know you are), in the double entendre saying from previously mentioned Liam Neeson:

If you like what you read, and lets be honest, of course you did, make sure to sign up for the newsletter and follow @MGoFish on Twitter. Jim Harbaugh does and he’s really great.