2017 was a disappointment for the Michigan football team. But it wasn’t a full team effort to go 8-5 as Don Brown showed off his master coaching abilities by replacing 10 starters with young talent and still having the #3 overall defense in college football. And though he does have to replace two future NFL draft picks in DT Mo Hurst and LB Mike McCray, Brown will return the rest of his defense, which is set to be even better in 2018.

The depth chart is loaded, but who will standout during spring ball? Check out my 2018 Michigan football spring ball preview’s defensive depth chart projection and positional breakdown: 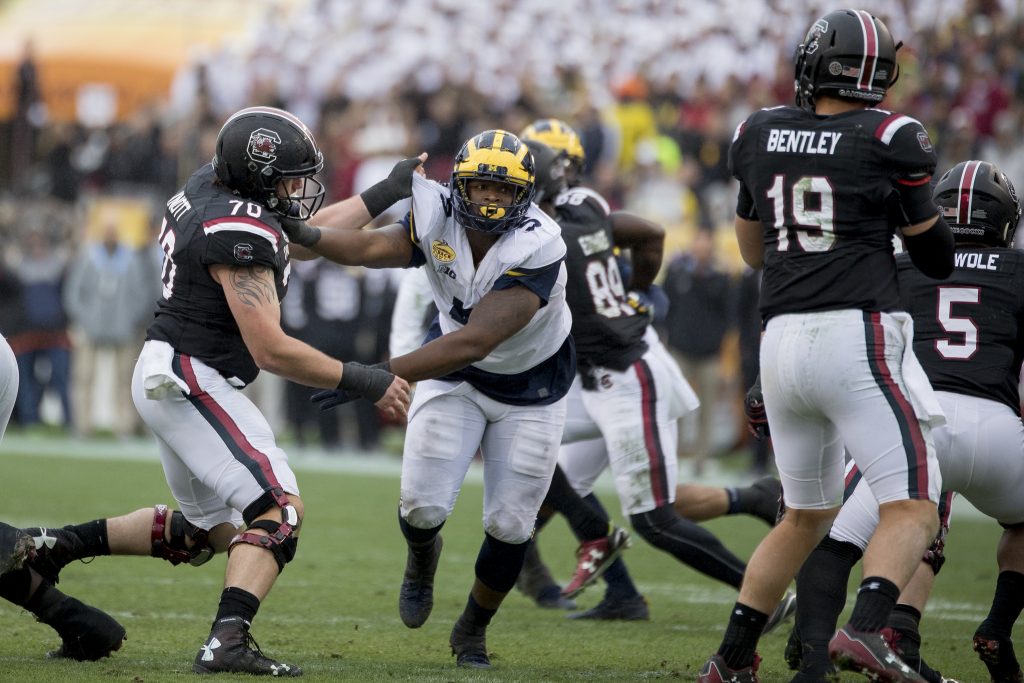 The biggest questions mark in the defense is who will replace Hurst. The All-American tackle was a monster for the defense so his replacement will have all of the attention, and it looks like it’ll be Michael Dwumfour. The redshirt sophomore has been the talk of winter conditioning but nothing’s a guarantee this early in the off-season. Fifth-year senior Lawrence Marshall and junior Carlo Kemp should both push for more reps, the latter just recently moving over to tackle this winter.

There will also be an interesting competition at nose tackle with sophomore Aubrey Solomon being the favorite after closing out the standout at the position and fifth-year senior Bryan Mone looking to get back to his pre-injury self. While redshirt freshmen Phillip Paea has the chance to be a nice player in the future, it’s critical for Mone to get back to being a disruptive force this off-season to ensure the depth on the interior. 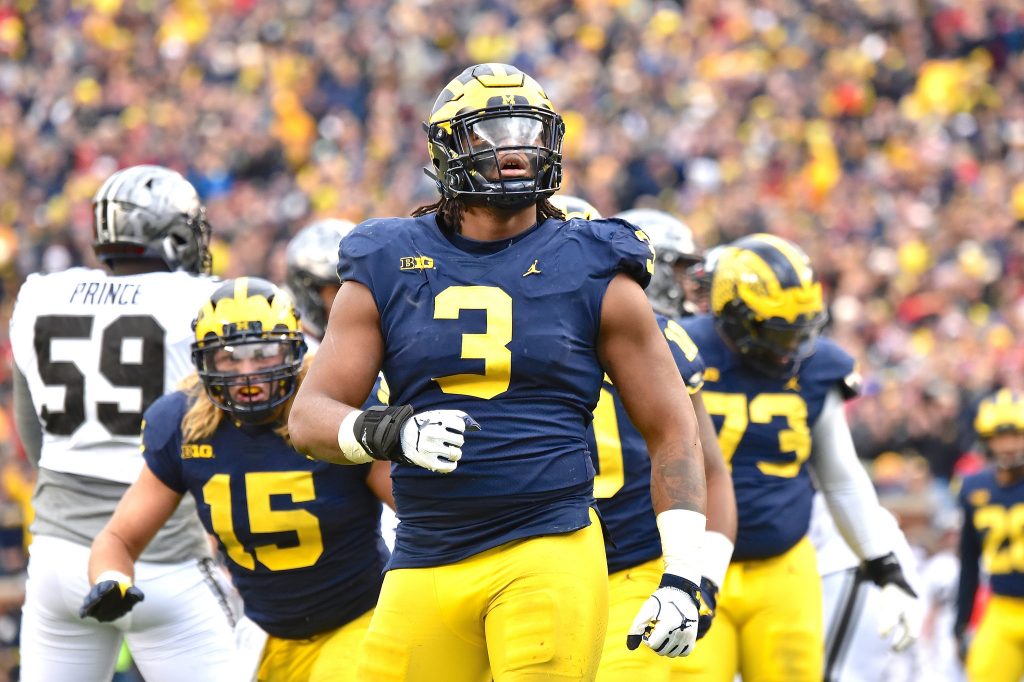 Thanks to the return of Chase Winovich for his fifth year of eligibility, Michigan touts the nation’s top starting defensive end pairing. Winovich is a mad man off the edge while Rashan Gary, who hinted at donning Tom Harmon’s #98 this upcoming season, is one of the scariest pass rushers in the country. But it’s the depth behind the two All-Americans that Don Brown and Greg Mattison will need to figure out this off-season. And there are several talented options to fight for those backup jobs.

Kwity Paye has been receiving a ton of love over the winter and looks like the favorite to be #2 at weakside defensive end. That is also thanks to Luiji Vilain continuing to battle injuries. Another 2017 injury that will be something to watch is Donovan Jeter coming back surgery, as he was making a ton of noise during camp before the injury. He’s a guy who could end up being the first off the bench behind Gary, especially after Carlo Kemp moved to defensive tackle. It’ll also be interesting to see how veterans Ron Johnson and Reuben Jones fit into the equation, as well as how redshirt freshmen Deron Irving-Bey and early enrollee Taylor Upshaw perform in their first tastes of spring ball. 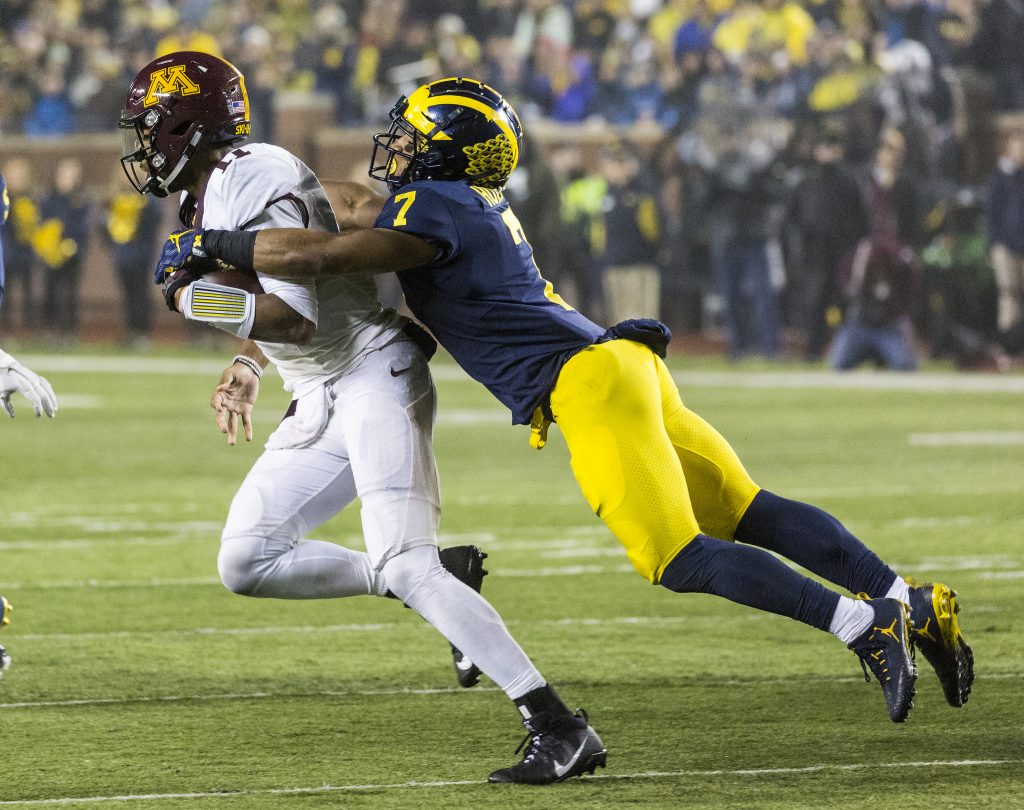 The Viper position in Don Brown’s defense is, arguably, the most important. It’s the position that does a little bit of everything and gives the player at the position the chance to make several impact plays each game. In his first season as starter, Khaleke Hudson did just that, racking up 18 tackles for loss and two interceptions. So, the starting spot is locked down. But who will back him up?

The veteran favorite looks to be former walk-on and the next in the line of Glasgow brothers, Jordan Glasgow, but the name I’ll be watching will be Brad Hawkins. The former wide receiver/safety 2016 commit and 2017 signee that took the prep school route to Ann Arbor is a freak athlete as he’s expected to compete at Viper after returning kickoffs during his freshmen year. He has the size and athleticism to compete. We’ll see if he can beat out Glasgow and Jaylen Kelly-Powell for that #2 spot on the depth chart. 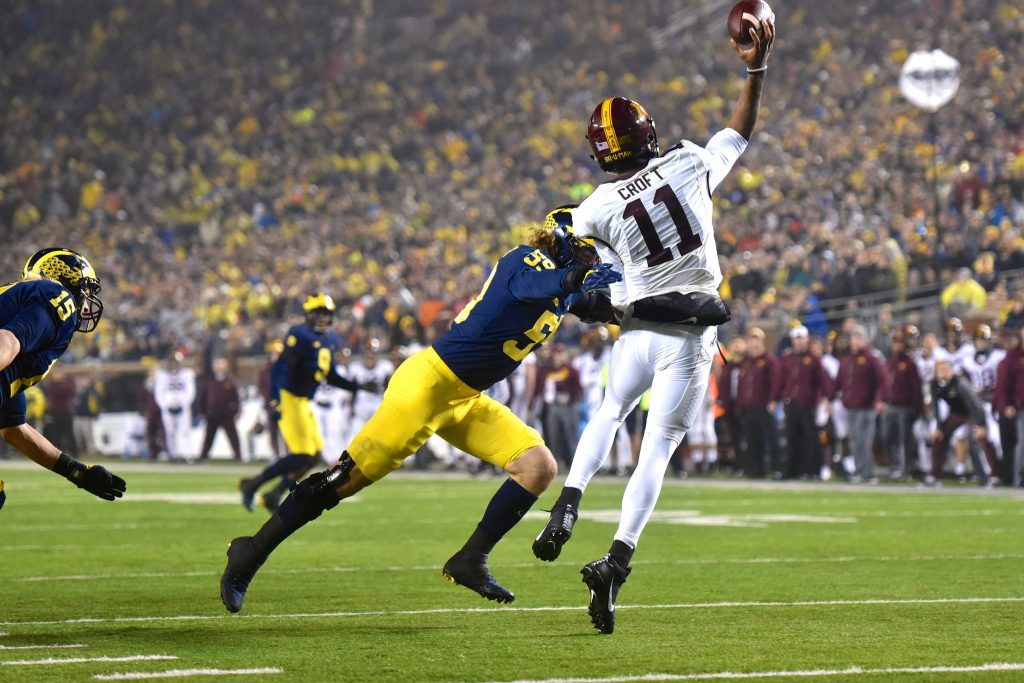 The strongside linebacker position is a little thin on the depth chart going into spring ball but has two talented options at the top of the depth chart. Noah Furbush is returning for his fifth year and looks to be the favorite to start at the position. However, rising junior Josh Uche has the chance to surpass him with a standout off-season. Uche flashed throughout 2017 and is one of my predictions to breakout in 2018. 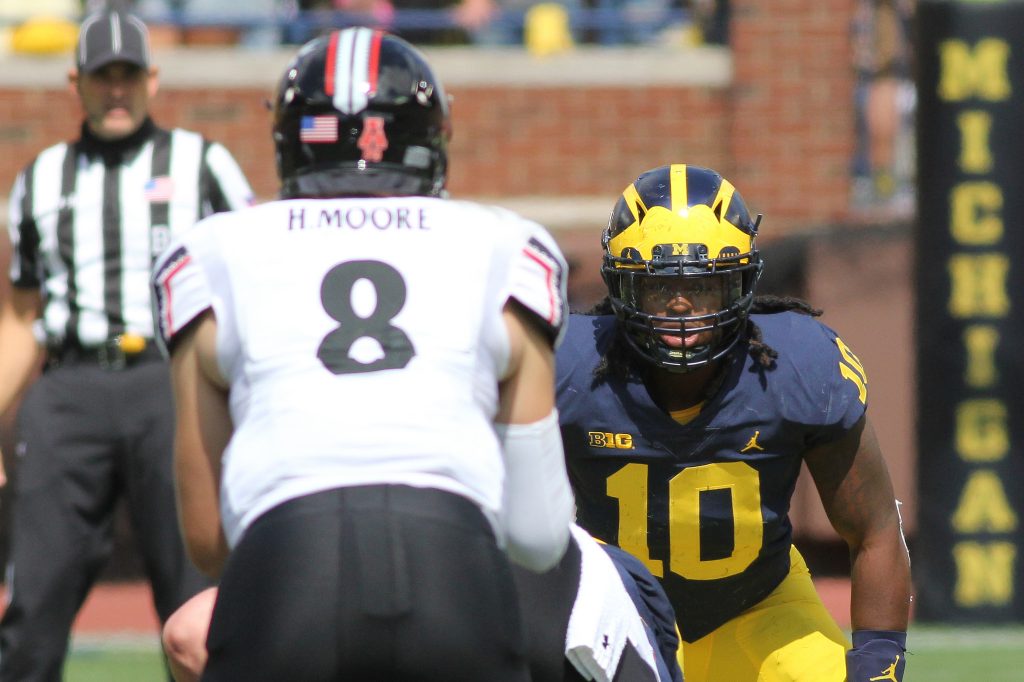 Middle linebacker is another spot in Don Brown’s defense that there isn’t much question about. Devin Bush Jr. is heading into his junior year after locking up All-American honors in 2017, his first season as a starter. Behind him is rising sophomore Josh Ross, who is another name I expect to hear great things about all off-season long. He played mainly on special teams during his freshmen year and looks ready to compete for playing time heading into year two.

Jordan Anthony is coming into his sophomore year as well and could be a name to watch this spring and summer. He was a five star recruit on Rivals, but is making the transition to full-time linebacker. His athleticism should get him plenty of opportunities. As for some veterans at the position, Devin Gil may get a look there. As for Elysee Mbem-Bosse, his status is unknown at this point. 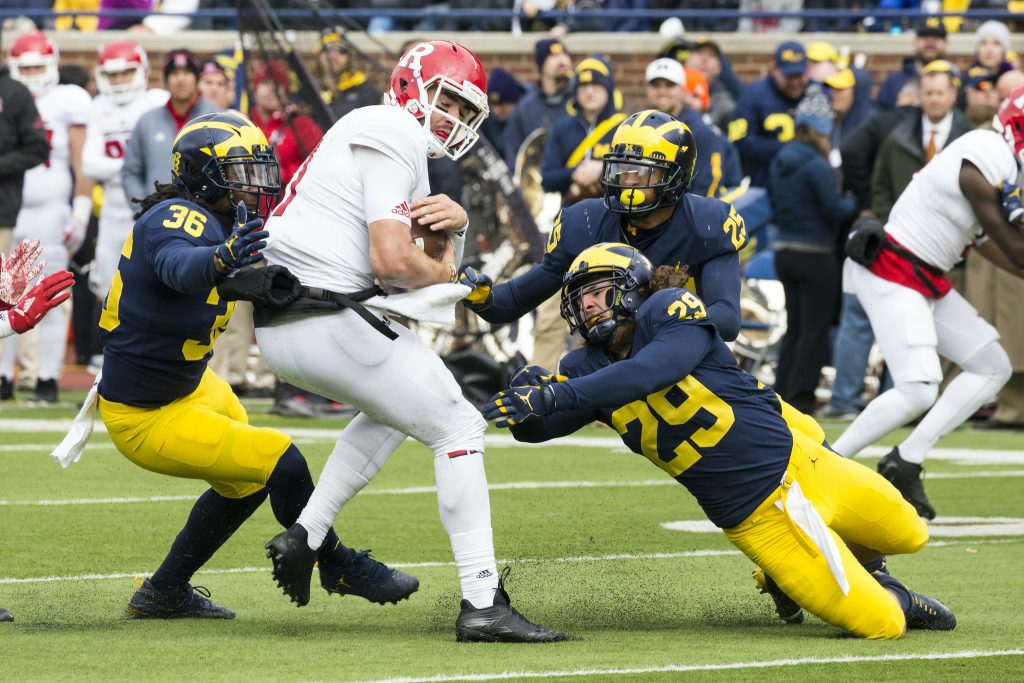 The one linebacker spot that completely looks to be up for grabs, the weakside linebacker position will be one of the best defensive competitions of the off-season. Devin Gil is the most experienced returner and the favorite to replace Mike McCray at the position. But he’ll have to be on his game everyday with redshirt freshmen Drew Singleton and Jordan Anthony expected to make big jumps in their first springs on campus. No matter who wins the starting spot, I expect all three to play and play a lot in 2018. 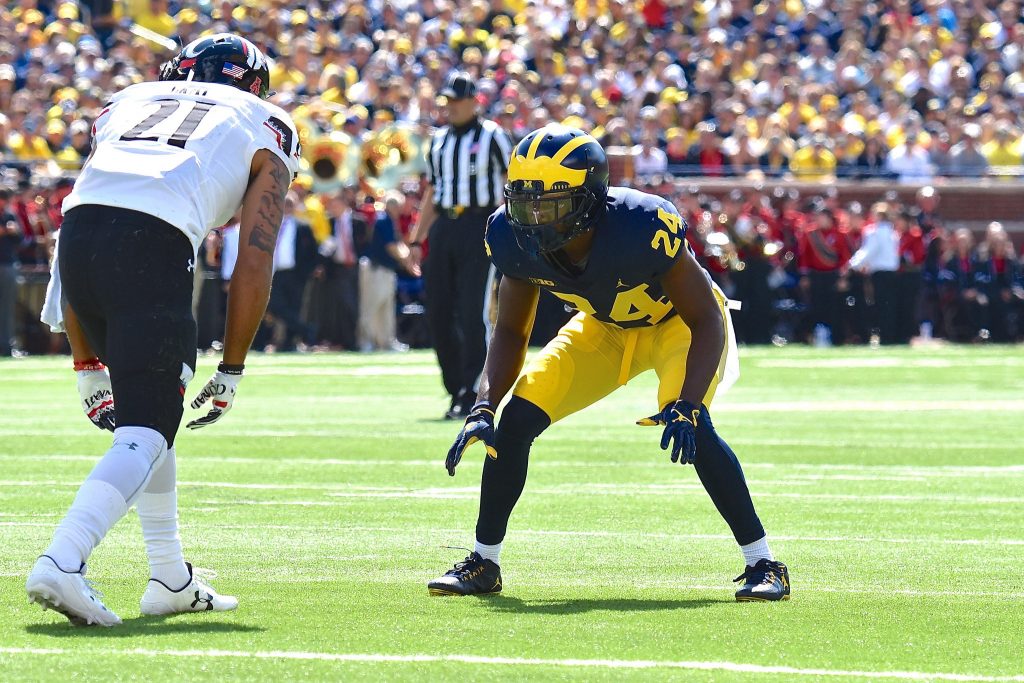 Another loaded position for Don Brown, both Lavert Hill and David Long put up great numbers for their first years as starters. Both were Pro Football Focus darlings, ranking among the top corners in the country, analytically. And both are set to return and lock down the outsides for the Wolverines defense. But the starting roles won’t be given that easy.

Ambry Thomas should take a huge step forward in his sophomore season but this spring should allow him to get a step up on Utah transfer, Casey Hughes, who will be enrolling this summer. Both guys should battle it out for the nickel position. Other names to watch this spring include Benjamin St-Juste, early enrollee Myles Sims and potential fifth year senior Brandon Watson. Though Watson’s status is still unclear at this point. 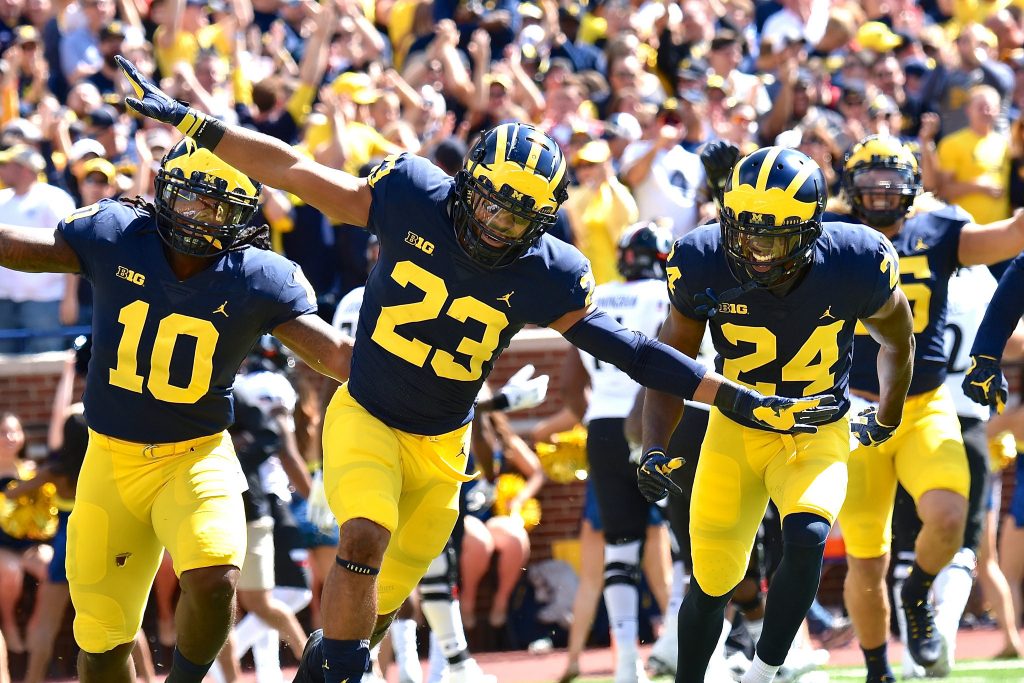 After a strong start to the 2017 season, the safety group took a step backwards as the year went on. Josh Metellus became a bit of a liability in man coverage and Tyree Kinnel had some struggles in the run game. But both will return and this off-season is big for their games and the defense. J’Marick Woods, Jaylen Kelly-Powell, Brad Hawkins and Myles Sims will all be in their first springs in Ann Arbor, and may get the chance to show what they can do with the top team.

While I believe Kinnel locks down the free safety role, the strong safety job is up for grabs. Will Metellus bounce back this off-season? Can one of the young guns snag the spot? It’ll be something to watching closely all spring and summer.

This is just my projection of the 2018 Michigan football defense for spring ball. What is yours? Let us know in the comment section below and make sure to check out my 2018 spring offensive starters prediction!