But who will take the lead in all of the position battles expected this spring? Check out my 2018 Michigan football spring ball preview’s offensive depth chart projection and positional breakdown: 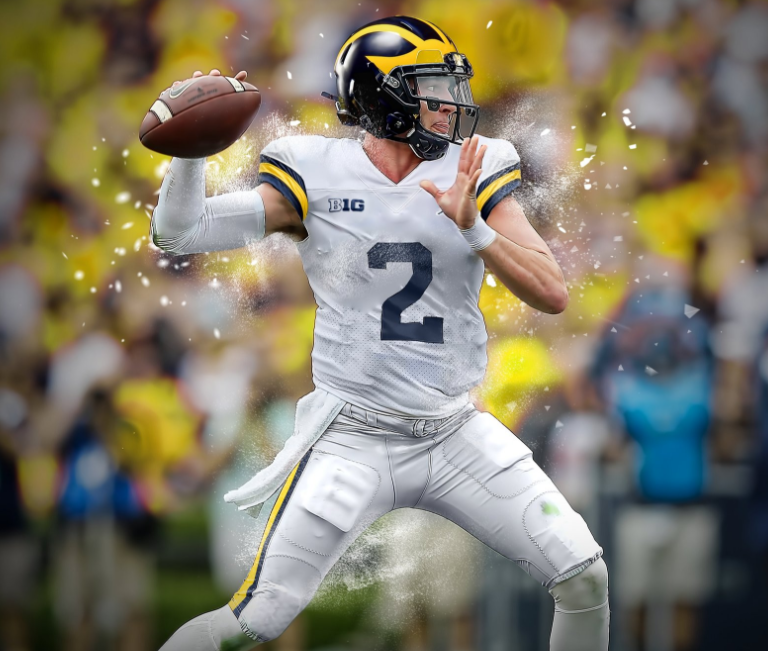 Jim Harbaugh and the staff will get their first real chance to see exactly what they have in the former #3 overall player in the 2016 recruiting class and Ole Miss transfer QB Shea Patterson. It continue to look good that he is eventually granted eligibility but, even if he wasn’t, Patterson is allowed to practice with the team this spring. And it’ll be what receives 90% of the coverage from the media.

Patterson is the most experienced quarterback on the roster and though Brandon Peters was the starter in 2017, Harbaugh is in need of much more from the position if the Wolverines are going to be a Playoff contender. But don’t write off Peters completely. While I expect Patterson to take control of the starting job, I expect both Peters and Dylan McCaffrey to make plenty of noise as neither will go down without a fight. As for Joe Milton, expect him to flash his natural talent but he likely needs a year of learning and working on his accuracy and touch. This extra spring is huge for his development. 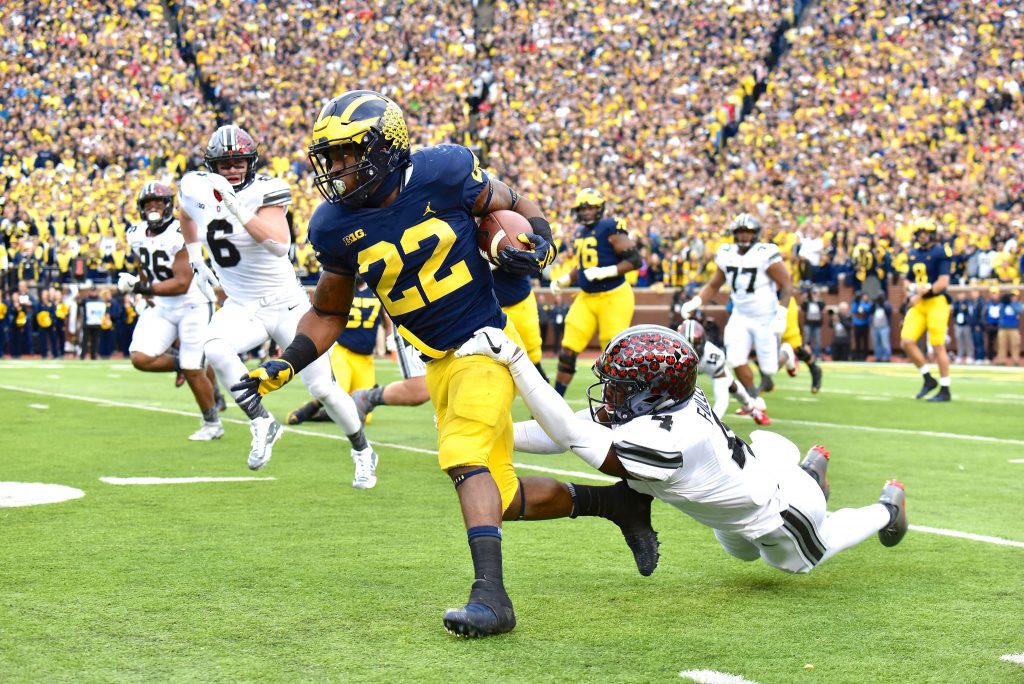 The depth isn’t proven but the top two names that are expected to be on the depth chart should give Michigan one of the better rushing attacks in the Big Ten in 2018.

Karan Higdon was the team’s Offensive Player of the Year in 2017, finishing the season just 6 yards shy of 1,000, and Chris Evans is a shifty run-pass option that gives the offense a dynamic duo in the backfield. But its the third and fourth backs on the roster that look to be up for grabs this off-season. Kareem Walker flashed signs of being a legit back during his limited carries in 2017, while O’Maury Samuels saw very limited action and Kurt Taylor made a little bit of noise as a practice standout during their freshmen seasons.

With a good group of running backs coming in over the summer, Walker, Samuels and Taylor will need to have big springs to get an upper-hand on the incoming freshmen. But the biggest thing to watch during spring ball will be Ed Warriner’s effect on the offensive line. He could help Higdon and Evans put together some huge seasons. 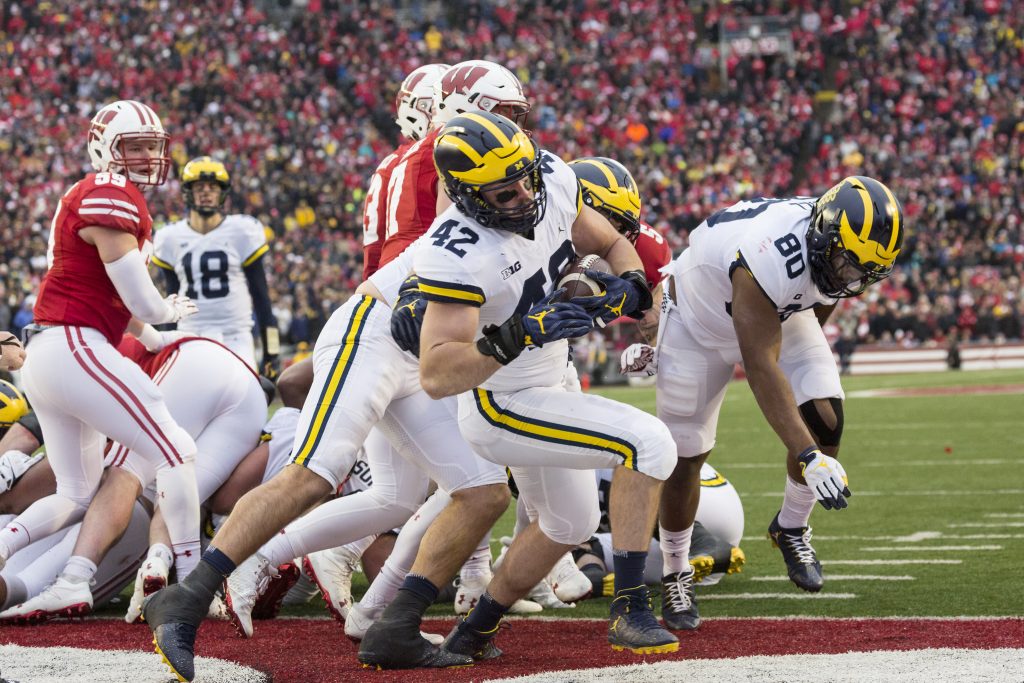 It’s the most overlooked position on offense but with the departures of longtime standouts Khalid Hill and Henry Poggi, the coaching staff will have some holes to fill. Freshmen cult hero Ben Mason will surely slide into the full-time starter role after getting more and more playing time as the 2017 season went on. But who will fill in the depth spots?

The staff signed an instant impact fullback in Ben VanSumeren but he won’t get to campus until the summer. Currently sitting behind Mason are three walk-ons. One of which is a name to watch: Peter Bush. He was a former standout high school quarterback and preferred walk-on that has an opportunity to make a name for himself this spring.

At this time, it’s the status of potential fifth-year senior Jared Wangler is unknown, though most believe he’ll play his final year of eligibility elsewhere. 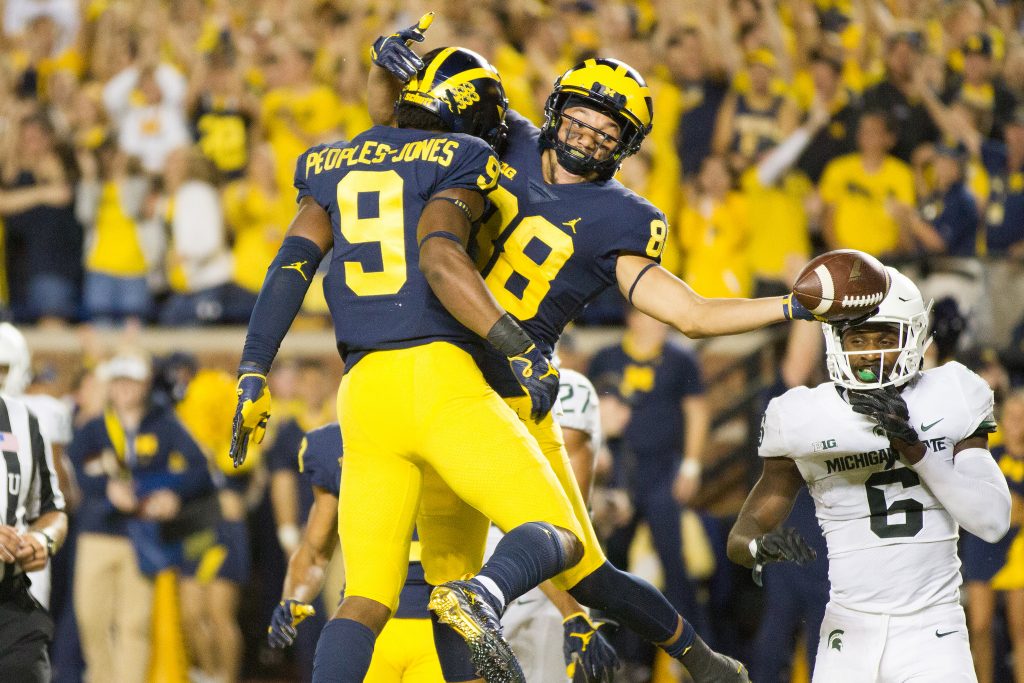 There isn’t a position group on offense with more depth that the wide receiver position. And this spring should be one of the best competitions at the position in recent memory, especially with the addition of Jim McElwain as wide receivers coach. The former Florida coach’s addition to the staff and the return of Tarik Black from a broken foot will be the biggest story lines but also seeing who takes control of the two deep heading into the summer.

Black, as long as he’s healthy, and Donovan Peoples-Jones look to be the likely top 1-2 punch on the outside to start, with senior Grant Perry expected to hold onto the starting slot receiver position. Kekoa Crawford, Eddie McDoom and Nate Schoenle are heading into their junior years with a ton to prove and the ability to play either outside or in the slot. But they’ll have their hands full with Nico Collins and Oliver Martin expected to take big steps forward in their first tastes of spring ball.

Collins is a name to watch closely all spring  after he stood out in bowl practices and got some run against South Carolina.

With a nice haul of tight ends coming to town this summer, Michigan’s veteran tight end group will get full attention to prove themselves to new TE coach Sherron Moore. Sean McKeon and Zach Gentry are the most experienced pass catching options while Tyrone Wheatley Jr. and Nick Eubanks are coming back from injuries in 2017. The battle between the four upperclassman will be one to watch, especially with the freshmen coming to town this summer. 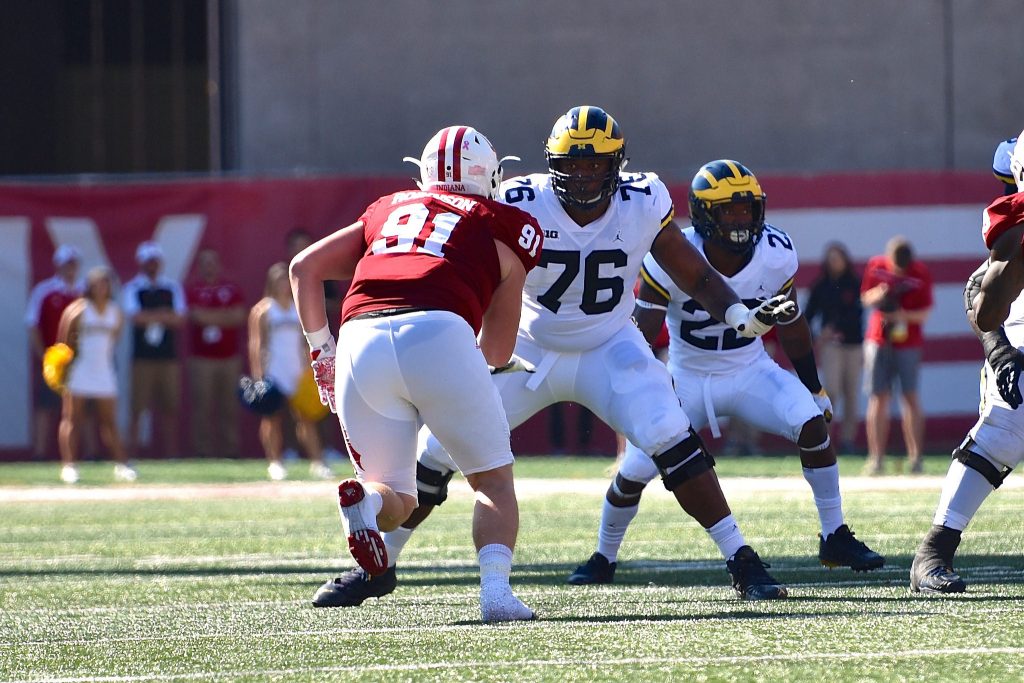 While the national media will be paying closest attention to the quarterback position, Michigan media will be watching both offensive tackle spots this spring. Mason Cole is off to the NFL, the staff missed on bringing in Rice transfer OT Calvin Anderson and only brought in two tackles in the 2018 recruiting class, only one of which is expected to start his career at the position. So, this spring is huge.

Potential fifth-year senior Juwann Bushell-Beatty will have his shot to prove his fifth year at the right tackle position, but he’ll need to improve on his pass protection if he’s going to do that. However, with Tim Drevno gone and Ed Warriner now in town, every tackle will have their chance at both spots. Seniors Stephen Spanellis and Nolan Ulizio have seen limited snaps in depth roles last season but didn’t show much to be favorites for at either side of the line. That is why the three names I’ll be watching closest will be Andrew Stueber, former top100 recruit Chuck Filiaga, and former defensive tackle recruit turned offensive tackle James Hudson.

Hudson may have the highest ceiling but may also need some more time to be trusted on the blindside. Filiaga has the raw size and strength but could be better situated at offensive guard at the collegiate level. That leaves Stueber, who I believe could become the leader in the clubhouse at either left tackle or right tackle after spring ball commences. 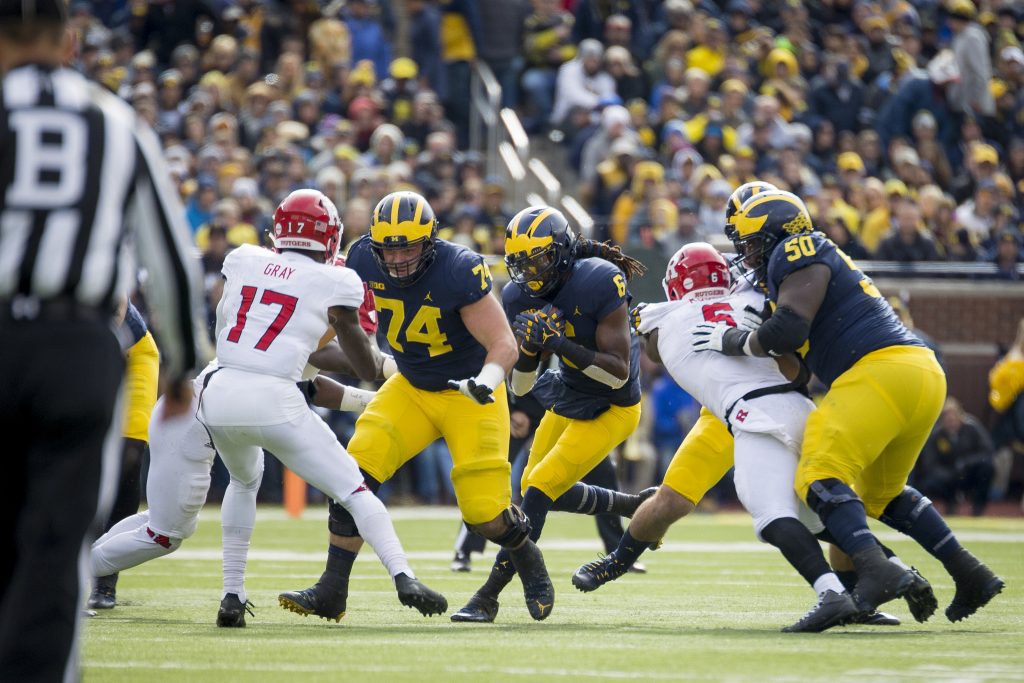 This may seem like a position that is pretty set with All-Big Ten performer Ben Bredeson and Michael Onwenu returning for their junior seasons. But nothing is 100% with a new offensive line coach. Bredeson has the versatility to play tackle and Onwenu struggled with some injuries and was replaced by freshmen Cesar Ruiz. Though Ruiz is expected to slide to center, he isn’t the only lineman pushing for the starting spot.

Jon Runyan Jr. and Stephen Spanellis are the veterans that should push for time all camp. Chuck Filiaga is a beast but far from a finished product. He’s a guy who I think could benefit most from a coaching upgrade and could make some noise this spring. As for the other 2017 signee, Joel Honigford has the athleticism to make an impact and has been putting on the needed size to compete but he may be another year away. 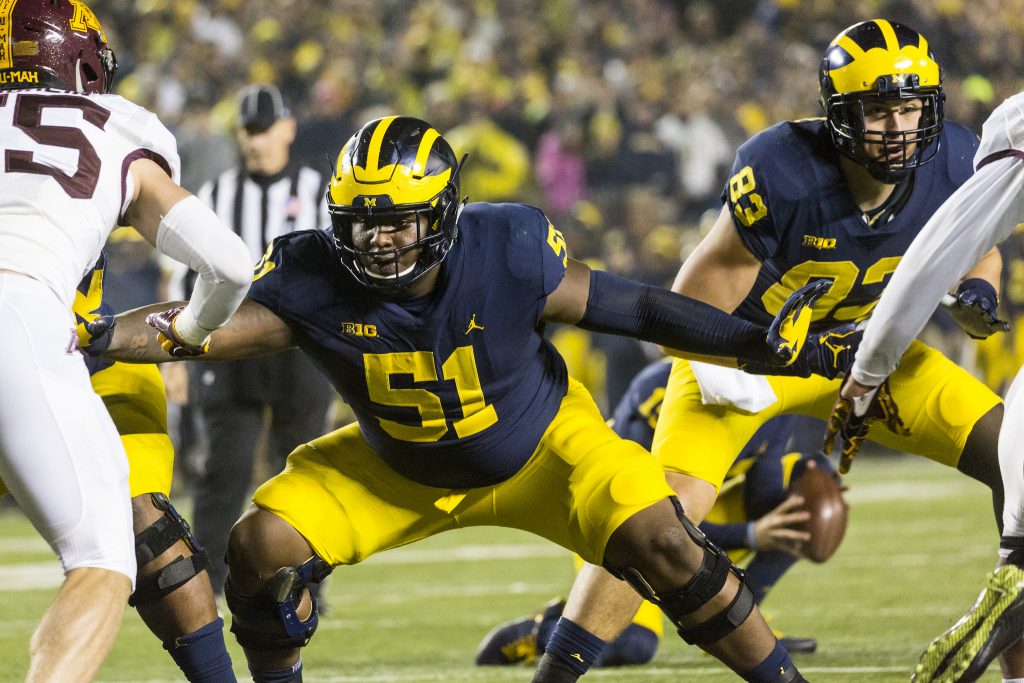 This is probably the most sure prediction on the offensive line. Patrick Kugler has graduated and his predecessor is firmly in place. Cesar Ruiz showed why he was the top rated center prospect in the 2017 recruiting class during his freshmen season. He wasn’t perfect as he struggled at times during his six starts at left guard, but he should only improve in his first spring in Ann Arbor.

Spanellis saw time in the Outback Bowl at center and should have the upperhand in the battle for playing time/the back-up role on All-Scout team standout Andrew Vastardis. Vastardis is a guy who could take a big step forward during his junior season.

This is just my projection of the 2018 Michigan football offense for spring ball. What is yours? Let us know in the comment section below!