To hell with the eclipse last week. This is much more beautiful. Last season, in Don Brown’s first season as defensive coordinator, Michigan was one of the best defenses in the country, and the best rushing defense in the country according to many of Bill Connelly’s advanced stats. They graduated 10 starters (technically Matt Godin was a starter in terms of total snaps) to the NFL (everybody but Godin, Stribling, and Thomas were drafted, and even they were signed shortly thereafter), leaving Mike McCray as the lone returning starter, though he and Maurice Hurst will serve as indispensable senior leaders of the defense. Here is an excellent tactical breakdown from Ian Boyd on how Michigan can be even better in Don Brown, Year 2. 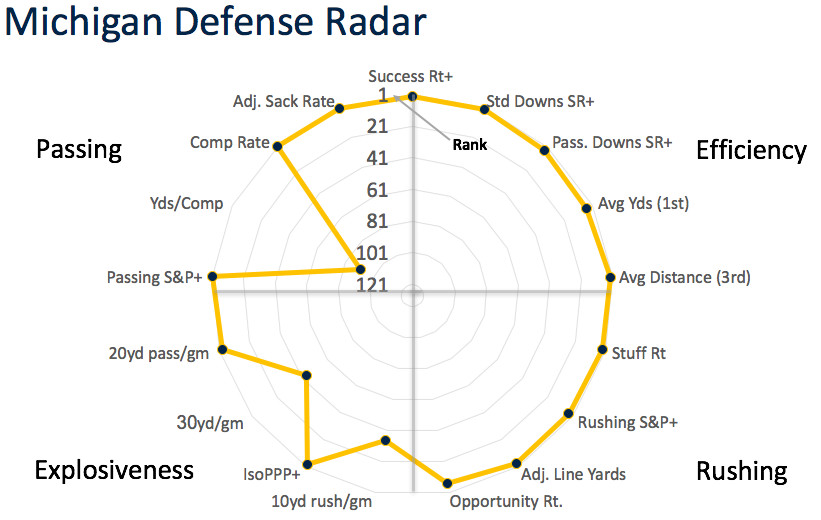 Last year the strength came from the defensive line depth. Chris Wormley could play end or tackle, subbing out Ryan Glasgow for Rashan Gary or Chase Winovich and Taco Charlton would clean up the mess on the weak side. This season, the front 4 are arguably more talented but the depth isn’t as as much of an attribute, but the linebacker play will likely be quicker, more agile, reckless, and physical. The secondary loses program legend Jourdan Lewis and two other starting corners as well as starting safeties; it may feel like we’re starting from scratch but these are Don Brown’s recruits in Don Brown’s system starting from scratch, with Rashan Gary. I think I’ll be okay. 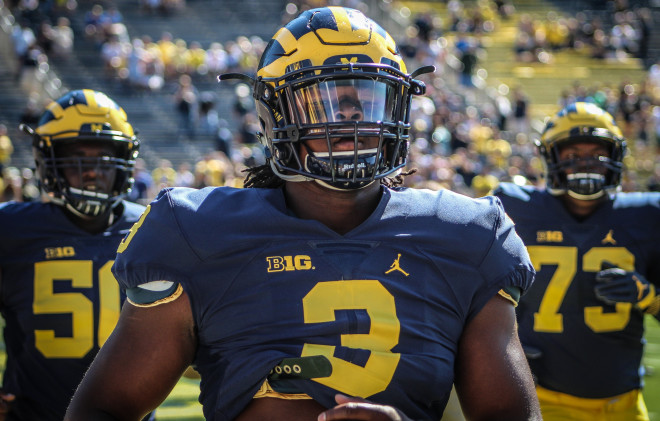 Rashan Gary runs a faster 40-yard dash than Chris Evans. Rashan Gary is a pre-season All-American (2nd team, but hey). Don Brown calls Rashan Gary the best he’s ever seen. And he’s only 19 years old. On the other end, Chase Winovich begins his time as a starter in only his second year playing the position after a 2016 campaign that had 9 TFL and 5.5 sacks (some in garbage time, but hey). Carlo Kemp has really impressed in camp this fall and will offer some much needed depth after Gary/Winovich. After that though, they will expect a lot out of either Jones or Vilain, who was about as close as you can get to being a 5-star without being a 5-star in last year’s recruiting cycle. Johnson and Irving-Bey are still probably a year out, but like the rest of this team, 2017 is simply a prep year for the championship run in 2018.

All in all, I expect opposing teams to have their hands full with these defensive ends. Tight ends will be too small, traditional tackles will be too slow and a double team will open up either a blitzing linebacker in the C gap or a Viper off the edge. There isn’t an easy way to combat the strengths of these defensive ends, and I think Taco and Wormley were the best teachers possible for the 2017 starters.

Maurice Hurst is being projected as a top-10 pick for the NFL draft next April and is widely regarded as one of if not the best defensive tackle in college football this season (he is the highest DL of McShay’s list). With Devin Bush and Jordan Anthony/Drew Singleton as speedier blitzing linebackers off of his hips, offensive linemen will be confused as to whether they should block the dreadlocks (Bush) or the belly (Hurst), I imagine allowing Hurst into the backfield for multiple TFLs. Behind him is Aubrey Solomon, a 5-star tackle plucked from SEC country who is casually dusting off Ben Bredeson in practice:

Bryan Mone is still relatively unproven. He’s been injured on and off throughout his college career, but enters 2017 at 100% for the first time as a Wolverine. He will round out the line as the nose tackle with Dwumfour as his primary backup, unless Solomon can fill in here and Lawrence Marshall can sub for Hurst. Marshall is up to 290 pounds after his second position change, but has never taken a collegiate snap at three-tech. 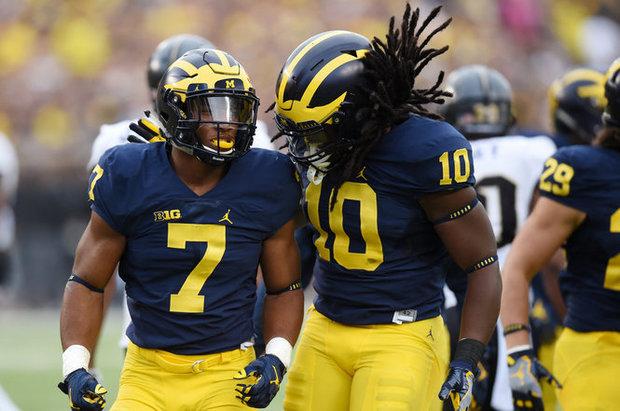 Oh man. Ohhhhhh man. This is so exciting. Last year, Brown worked with McCray and Gedeon from two spatially limited but physical backers and turned them into draft picks (of course). McCray struggled with protecting the edge (just watch the Maryland tape) and with being mismatched in certain coverages (Dalvin Cook burned him for long yardage, but he did that to everyone in college), but that’s to be expected for a guy that was recruited based out of a 4-3 single gap system. This year, Devin Bush, who is my favorite recruit from 2017 will be a perfect complement to McCray’s skillset; McCray is perfect to stuff the run between the A and B gaps while Bush can cover anyone from tight ends to bigger running backs out of the backfield sideline to sideline. He’s physical, fearless, at times almost reckless, but he was born to play in Don Brown’s system.

Wroblewski, a former walk-on, has impressed the staff with his cerebral approach to Will linebacker. After Wrobo and Bush, freshmen Jordan Anthony and Drew Singleton are also perfect fits for the Don Brown blitz-a-palooza system. Anthony split his time at IMG between LB and RB, showing his athleticism and fluidity to find gaps in the line, both for running the ball and stopping those running the ball. Singleton was almost more impressive than Gary when Paramus played at the Big House in 2015, but because of a torn ACL during his 2016 senior season, he was largely an afterthought in the recruiting cycle but still an amazing signee. Behind McCray, Josh Ross won three state championships at St. Mary’s, is a spitting image of his brother, and will be a faster and better-in-coverage version of McCray when his career is done.

Brown, Harbaugh, and LBs coach Partridge recruited two different types of linebacker: a traditional over-center run stuffer and field general (McCray, Ross), and his wild card sidekick who will play on the weakside of the field in a variety of assignments (Bush, Singleton, Anthony), fixing any problems or blown assignments with speed and aggression.

Khaleke Hudson, my second favorite recruit from 2016, was born to play Viper. He’s as physical as Peppers, as quick as Peppers, but don’t you dare compare him to Peppers, because he’s taking his own spin on the position. He played in 12 games last season mostly on special teams and as a traditional safety, but he will use his fearless physicality (his Twitter name is Hit-Man) to be an added weapon in the box on the edge.

Josh Metellus was Peppers’ replacement in the Orange Bowl last season, but all practice signs point to Hudson starting in this role in 2017 and Metellus dropping back to a more traditional strong safety. Furbush also performed admirably in certain personnel packages, though I think he would be a target to exploit if he were to start in the position. 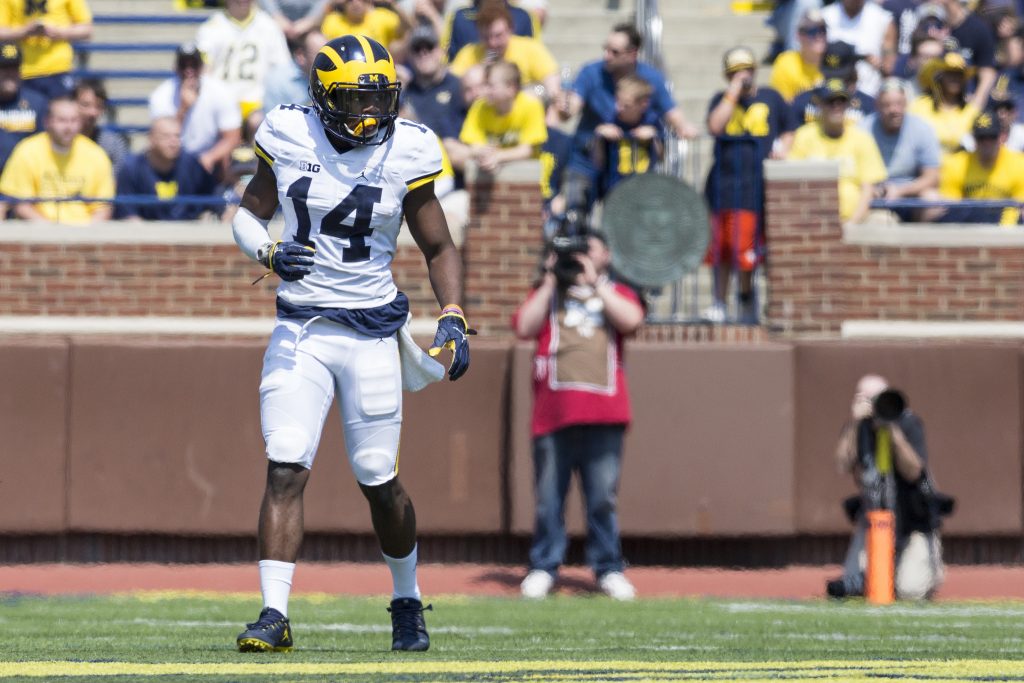 Metellus is the only one on this list with game experience, thus making him the obvious choice. That said, secondary coach Brian Smith has said that Woods has picked up the system quickly, an advantage of enrolling early, but there is always the task of breaking the bad habits of high school that went unnoticed largely because of athleticism. With such a young position group, the goal is simply to eliminate the explosive plays and keep the ball in front. 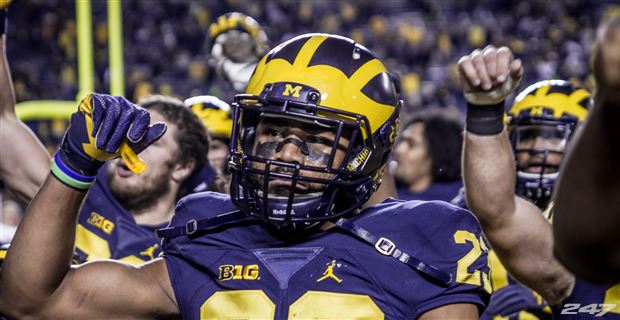 Kinnel is the oldest of any player in the secondary as a junior, but he has warmed to the role of being a leader. He played in mostly special teams last year, blocking multiple punts, and will take over as a smaller safety than last year’s Thomas but tighter in coverage. JKP, another early enrollee, has impressed from day one with both his physical ability to bounce between safety and corner and his mental capability to point out offensive schemes and fronts. He’ll see the field frequently this year.

Brad Hawkins is listed on both position groups because I frankly am not sure where he will end up. He took a prep year as a wide receiver and had one of the most impressive films around, and then it was announced he was moving to safety. He is an excellent athlete and will likely be able to hold his own with most receivers, but will need a year to learn the finer points of coverage and schemes.

This is where the depth becomes an issue. To begin last season, Channing Stribling was a nickel player or the first sub for Clark or Lewis, but after Clark tore his ACL, Stribling was wonderful in pass coverage (QBs throwing his way had a rating of 22.7, 2nd best in the country of any CB with more than 40 targets) and helped the defense immensely. Lavert Hill as a sophomore is right around where Jourdan Lewis was; a little undersized but attached at the hip to any receiver and unshakable in press coverage. David Long is projected to start but between an injury to shut him down last year and some frustrating tendencies through camp this year, freshman Ambry Thomas might see the field early.

Drake Harris fell victim to a depth issue at his natural position of wide receiver (that will happen when Harbaugh nets the top WR recruiting haul in the country) and now is Harbaugh’s Richard Sherman project 2.0 (Sherman began his career at Stanford as a WR). If he works out, great. If he doesn’t, no hard feelings. Brandon Watson was great in press coverage in limited snaps last season but might not be able to keep up with the taller and longer receivers in a full-time starting role. Keith Washington was making strides in camp but recently announced his intention to transfer. Ben St-Juste is a marvelous physical specimen but will need a redshirt year to grow accustomed to Americanized football.

The defense is definitely young, but that doesn’t mean they aren’t talented. They’ll all learn from McCray and Hurst on how to handle themselves on and off the field as well as how to diagnose offensive tendencies and feel the game within the game. They’ll be like Mean Machine in The Longest Yard after they’re down by three touchdowns to the guards; unbelievably athletic, physically terrifying, and recklessly tenacious with a few aggression-based penalties thrown in there. The task for 2017 won’t be to match 2016; I don’t think that’s possible because 2016 was simply a historic defense within the program; the task for 2017 is simply to prep for 2018, when Rashan Gary will be first team preseason All-American and a top-5 draft pick; when Ambry Thomas and Lavert Hill are even better than Lewis and Stribling; when Hudson has already had a year of the Viper under his belt and has made it his own, and when Bush and Ross are the thunder and lightning like LenDale White and Reggie Bush were on offense for USC.