It’s that beautiful time of year once again. It’s always hard to get excited for baseball knowing practices are inside, skipping ground balls off of turf and taking swings off of a tee rather than facing live pitching on the diamond, feeling the dirt on your skin and the calm chaos of the beautiful game of baseball, but no matter the weather outside, it is baseball season once again.

Even though the sun sets before we eat dinner and preparation in a gym cannot adequately mimic live reps, Team 151 has been working day and night to make this season a memorable one. Last season ended on a disappointing note for Michigan, winning only 2 of its last 11 games en route to elimination from the Big Ten Tournament by who else but Ohio State, closing the book on some of the best players to come through Michigan’s program.

Players like Carmen Benedetti, who was seemingly on base more than he wasn’t, could close games on the mound, and give Michigan the big hit when they needed it; players like Brett Adcock who put the rotation on his shoulders and could strike out almost any hitter in the Big Ten; players like Matt Ramsay who transferred in for a final year and led the team in hitting and led the team off the field as well. Michigan had a tight core of leaders last year and although the ending was far from an accurate reflection of this team’s talent and capability, last season also sparked hope in the underclassmen and newcomers that now carry the torch.

Freshmen and transfers stepped up down the stretch, often providing a spark that wasn’t expected and should that even method of distribution filter down to this season, Team 151 could be quite a dangerous team.

Michigan leaned heavily on a few core producers last season, namely do-it-all slugger and flamethrower Carmen Benedetti and outfielder Cody Bruder. Benedetti and Bruder hit the cover off the ball, leading the Michigan offense to a team .299 average and a hot start on the West Coast swing, winning their first five games and 20 of their first 25. Behind a balanced pitching attack of draftee Brett Adcock, now-junior Oliver Jaskie, and now-junior closer Bryan Pall, Michigan could win in both shootouts and pitchers’ duels, making them difficult to beat and they cruised through Big Ten play until mid-May when a loss to Central Michigan and a 3-game sweep from Ohio State took the wind out of the sails and Michigan limped to the finish line. Graduate transfer Matt Ramsay, table setter and capable defender, was lost for the season due to a shoulder injury, giving then-freshman Jonathan Engelmann early playing time, starting in 28 games down the stretch. He showed many signs of promise, both as an adept defender and base runner, and as he rose, so did second baseman Ako Thomas (.258 hitter and .387 OBP in 52 starts) and shortstop transfer Michael Brdar (.250/.318/.324 in 52 starts), who both heated up as the season wound down. After the season, 5 Wolverines were drafted in MLB’s first-year player draft; Benedetti and Adcock to the Astros, and pitcher Evan Hill to the Tigers. Catcher Harrison Wenson and pitcher Jackson Lamb were also drafted but chose to return to school for their senior years, which is about as big of news as Maurice Hurst announcing his return for this season.

Wenson returning speaks volumes to his dedication to the program and the direction in which fifth-year coach Erik Bakich has taken it; if this team couldn’t win why wouldn’t he return? Wenson will be the cornerstone of the offense and the team, which is one of the oldest and most experienced in the program’s history, reinforcing Bakich’s vision to create a “legacy program“. Wenson led the Big Ten in RBI last season (56) and the team in home runs (8) while slugging .491, second on the team to only Benedetti’s .492. His offensive production is all the more impressive seeing as he started 57 games last season, many of those at catcher. Surrounding him to lead the offensive attack is junior Jake Bivens, one of the best leadoff hitters in the Big Ten and arguably the country. His 53 runs scored was a team best, and his hitting slashes of .356/.441/.416 were near the best on the team. Having him at the top of the order will be an incredible boost to the offense. First baseman Drew Lugbauer also had a breakout season last year, slugging .483 and collecting 7 home runs and will protect Wenson in the order just like last year.

Five players who started 50 or more games and nine pitchers who appeared in at least 10 games are returning this year, and two more major contributors played in more than 30. The returning experience of the team lends itself to optimism, both in what can be expected in terms of production and in terms of leadership for the newcomers, of which there are many. Between Michigan’s small but powerful recruiting class (one of the higher ranked ‘per capita rated’ classes in the country, like Stanford’s football class this year) and the impressive list of transfers, the positions that are open immediately will be competed for heavily and the positions that are open following the 2017 season will be in good hands. The incoming class is highlighted by freshmen pitchers Karl Kauffmann, who was selected first team All-State both his junior and senior seasons at Brother Rice in Birmingham, and Portage native and legacy Jack Weisenburger, who was also All-State twice and selected to the Dream Team his senior season. Highlighting the transfers is outfielder Miles Lewis, who was named a Louisville Slugger Freshman All American and was the WAC Freshman of the Year.

My rough guess at the lineup and rotation:

Sophomore William Tribucher and junior Jayce Vancena will lead the bullpen and junior Bryan Pall will close. Many of the outfield positions are up for grabs; it is no sure thing who will start where. Christian Bullock and Dominic Clementi are big time recruits out of the midwest that could make some starts or come off the bench are absolutely expected to start in 2018 and beyond. Wenson and Lugbauer will split catching duties to begin, but behind them there are plenty of selections on the roster: transfer Brock Keener, and freshmen Marcus Chavez (who has a ridiculous 1.89 pop time) and Harrison Salter. I can imagine we’ll see all of them throughout the season, early on when there are busy stretches of 4 games in 3 days vs. Seton Hall and 6 games in 5 days in the Jack Gifford tournament. This is an extremely balanced team of returning production and leadership and young talent and expectations. It will be exciting to watch how Bakich manages that balance and who shines through for the future.

Exciting, noticeable, and favorable. The biggest highlights of the schedule are the 18-game home stand between March and April, a length that is virtually unheard of in college athletics and especially baseball, and the Dodgertown Classic, an annual showcase of the biggest West Coast teams. This year, Michigan rounds out a group of UCLA and USC, both traditionally powerhouses of college baseball though they are not ranked this preseason, and University of San Diego, the alma mater of MLB superstar Kris Bryant. Michigan will be on the national stage early with a chance to prove themselves against some of the best programs in college baseball; win or lose, it will be tremendous high pressure experience and good practice for the Big Ten schedule. Michigan finishes the road trip for three games against Lipscomb in Nashville and then heads to Ann Arbor for their home opener on St. Patrick’s Day against Northern Illinois.

Inside the conference, Maryland is the only ranked Big Ten team to start the season, and they only barely squeaked in at #24. After the Terps, I would put Michigan, Michigan State, and Nebraska as the conference favorites; Ohio State and Minnesota went to the regionals but both lost huge amounts of talent and will be extremely young. At home, Michigan has Ohio State, Illinois, Indiana, and Penn State for 3 games and Michigan State for 2 games, while they travel to Maryland (an early season conference battle), Purdue, and Rutgers for 3 games and to Michigan State for 2 games.

Michigan is a very capable team this year, but the non-conference schedule is very tough. Michigan had tremendous success against the MAC last year; this year, Team 151 faces 6 MAC opponents (Central, Eastern, Western, Toledo, Bowling Green, NIU) and should win nearly all of them. Michigan hosts Oklahoma for three games in April as well as Notre Dame for a weekday game shortly after the opening of conference play. In addition to the Dodgertown Classic, Michigan opens against Seton Hall, who finished 38-20 in 2016, in Florida and then continues to the Jack Gifford Tournament in California, where they will face tough teams such as Creighton (38-17 in 2016), Loyola Marymount, and Santa Clara.

Overall, the schedule has lots of big name programs but it is not all that daunting, unlike last year when Michigan traveled to Cal Berkeley and Oklahoma State and had both Nebraska and Minnesota on the conference schedule. It is favorable to the team and its style and I fully expect the team to have a pretty record for the first 4 to 6 weeks of the season much like they did last year (maybe not 20-5 pretty, but still pretty). Michigan has 56 games scheduled for the season, and as always that number will change due to the unpredictable weather that comes through the midwest this time of year, but I think Michigan could win 40 games this year if everyone can produce at the level they did last year.

This isn’t all that important of a section, I just wanted to remind you that Michigan has Nike uniforms again, even though I wish they went with the traditional button down jersey rather than the retro pull-over. Says Bakich: “Nike is the heavyweight champion of uniforms, footwear and apparel in college baseball. Our players and staff are thrilled and look forward to this exciting new chapter.” 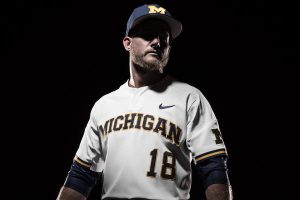 This team is exciting. There is plenty of talent, young and old, to go around and the schedule is favorable. Michigan has plenty of games circled on the schedule already and some huge names to put on their resume at the end of the season. With 18 straight games at home, please do your best to go out and catch a game or two to witness that team is for real.