In the words of rapper Drake, the Michigan football team looks to make it back-to-back’ wins. And it seems like they will be facing an opponent of Meek Mill’s caliber. UNLV continues its world tour, making their way to Michigan Stadium after a stop at Northern Illinois, and a home tilt with UCLA.

In last week’s matchup with then #13 UCLA, UNLV held the Bruins to one touchdown in the first half. UCLA eventually wore down the Rebel’s defense, giving up 273 yards and two touchdowns on the ground. The defensive line is led by senior defensive lineman, Sonny Sonitoa. He heads a defense that has given up 458 yards rushing in two games.

The UNLV linebackers may be the most experienced position group on the defense. Linebackers, Ryan McAleenan, Tau Lotulelei, and Matt Lea, are all returning. McAleenan currently leads this group with 14 stops this season. Lotulelei finished last season with 100 tackles.

The big guys up front are becoming a more complete unit as the weeks go on. And last week, the Michigan offensive line showed that with discipline and time on their side, they’re able to wear down a lesser opponent. Anticipate more of last week’s game plan, using a downhill rushing attack, and establishing the run early. Ben Braden is adjusting to his new position at left guard. Oregon State was arguably his best game in a Michigan uniform to date.

The depth chart seems to be shaping up amongst the running backs. De’Veon Smith is establishing himself as the starter, followed by Ty Isaac and Derrick Green. The wild card will be the return of Drake Johnson who received one carry against Oregon State. Harbaugh believes Johnson will earn more carries this week. 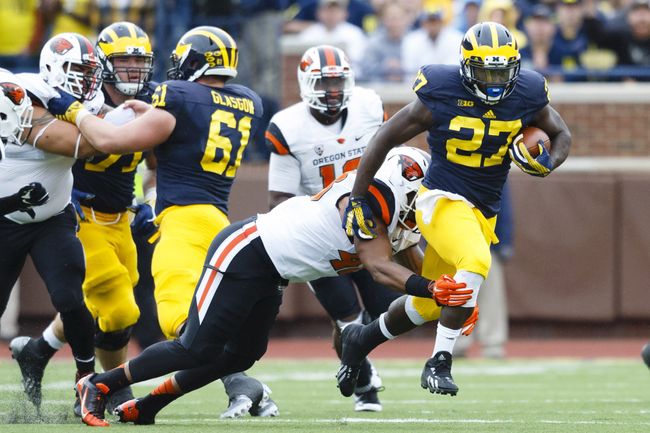 Smith seemed to improve his vision after seeing the Utah film and accepting some coaching.  His ability to break tackles is uncanny. The coaches know that if they can get Smith to continue making strides with his vision, he could be a top back in the Big 10. It’s his job to lose and I don’t think Smith plans on being a backup on this team.

A confident O-line will build on their recent success and make it a long day, as they wear out the UNLV front seven.

UNLV picked off three passes during last week’s loss, showing that they will take advantage of mistakes. All members of the starting secondary are taller than 6 feet. This means quarterback, Jake Rudock, must only put the ball in areas where only his receivers can make plays.

Senior strong safety, Peni Vea, leads the team with 17 tackles and one pass break up. Free safety, Blake Richmond, standing at 6’3’’, is tied for the team lead in interceptions (one) and leads in pass break ups (two). UNLV will shuffle several cornerbacks as they continue to search for the right combination for a secondary that has surrendered over 600 yards in two losses.

Harbaugh and offensive coordinator, Tim Drevno, will continue to run the ball to set up the pass. Consider Rudock more of a game manager at this point. Trying to get comfortable with the new playbook, Rudock has turned to the ball over five times in two games. Rudock threw the ball 26 times last week and completed 18. While this is considerably less than his 43 passes against Utah, running more and throwing less decreases his chances of turnovers. The running game will be the focal part of the offense, but look for some play action passes, especially as they work to establish their timing on passing routes.

Tight ends continue to be a mainstay in the passing attack. Jake Butt, Ian Bunting and AJ Williams all had over 20 yards receiving last week. The tight ends are great, but the team will not reach full potential without the use of wide receivers. Rudock will need to develop a rhythm with his pass catchers and this is the week to do it before facing a solid BYU team and then the Big 10 schedule.

Michigan will use play action to break a couple big plays against the UNLV secondary. Rudock hopes to connect on deep balls with Drake Harris and Jehu Chesson, something we have not seen yet.

The UNLV offense combined for 181 yards rushing against UCLA. If they get some running room, they will capitalize on the opportunity. Junior running back, Keith Whitely, is looking for his first touchdown of the season, but did pick up 73 yards on 12 carries against the Bruins. He also has a long of 41 yards demonstrating he can break away from the defense. Freshman Xzaviar Campbell may get the ball in his hands, as well. He is averaging 6.9 yards per carry despite a small workload at this point in the season.

UNLV is in a similar yet different boat on the offensive line. They are featuring four new starters who are still learning how to play together. Going up against a Michigan defensive line that has been in the opponent’s backfield often this season, they have their work cut out for them.

Chris Wormley has been an absolute beast the past two games, racking up six tackles for loss.  Among the countries leaders in that category, Wormley may finally see a double team. Regardless, expect Wormley to make the line work hard to stop him freeing up Taco Charlton and Willie Henry to do some damage.

Simply put, the linebackers improved greatly against Oregon State. There were less missed tackles and they showed better technique removing themselves from blocks. The linebackers must continue to build on their play and become tackling machines.

Michigan’s experienced front seven will be too much for an inexperienced UNLV offensive line. Linebackers stay committed to improving and getting off blocks, making it tough for UNLV to run. 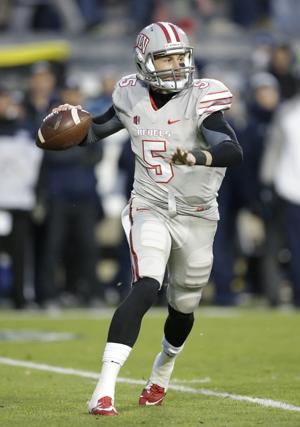 Who’s playing quarterback for the Runnin’ Rebels? Not sure they know either. Starter Blake Decker went down early against UCLA and did not return. Backup Kurt Palandech replaced Decker, but was ineffective. Palandech was 4 for 15 for four yards. And no, that’s not a typo. Rumor in Vegas is that Coach Sanchez might play true freshman Dalton Sneed, a quarterback they were hoping to redshirt.

At receiver, Devonte Boyd is considered to be the playmaker of the offense. Boyd is 6’1’’ and dangerous with the ball in his hands. With only eight catches this year, he will be looking to make a name for himself on national TV against the Wolverines, especially if they are without top corner Jourdan Lewis.

Lewis suffered a concussion last game and it is unknown if he will play Saturday. If Lewis is unable to go, Jeremy Clark is most likely to see reps in his place. Whoever takes his place needs to be more conscience of pass interference penalties. While borderline calls, the Wolverines have been flagged a couple times the past two games for interference.

The Wolverines should feast on whatever quarterback takes snaps for UNLV.  The defensive backs are due to force a turnover.

UNLV did a lot of punting last week. Punter Logan Yunker was consistent averaging 42.6 yards a punt and a long of 65. Kicker Nicolai Borland is four of four on field goals this year.

Brian Cole has been ridiculously close to blocking a few punts this year.  It’s safe to say that Michigan has been very aggressive on the punt block. Is this the week he gets one?

Kicker, Kenny Allen, was perfect last week, improving to three of four on the year.

At this point in the season, neither team has really shown much on special teams. UNLV’s kicking game looks to be above average but Michigan’s athlete’s equal things out.

Wolverines will look like they’re Jordan in 96’ and 97’ in this one. The whole depth chart should see time at some point during the game.