Michigan has had some exciting games against the Wildcats the last two seasons. They weren’t pretty, but Michigan took both contests in dramatic fashion.

Wildcat players have been thinking about this game since Michigan left Evanston with an overtime victory last year. Not only that, they come in undefeated at 5-0 and will give it their all to make it six straight.

The Wildcat defense has been impressive their first five games. They are as fast and athletic as any team the Wolverines have faced so far this year, currently ranked 10th in total defense.

Northwestern Linebacker Matthew Walker is a name you’re going to hear quite a bit on Saturday.  He leads the defense with 44 tackles, 8.5 of them coming behind the line of scrimmage.

Defensive linemen Deonte Gibson and Dean Lowery power a line that has helped hold?opponents to a measly 587 yards rushing in five games.  Given that Michigan is a heavy run team, something will have to to give in this matchup.

De’Veon Smith is once again at the top of Michigan’s depth chart. Smith was missed last week, but Drake Johnson stepped up by admirably scoring two touchdowns. Johnson isn’t too far off of his 2014 form, running for 68 yards on 13 carries.  The one-two punch of Smith and Johnson should be enough to give the Wildcats some fits.

Can the Michigan offensive line stand their ground and get to the second level?  Can the Northwestern front seven duplicate past performances? Walker will make his usual plays, but he will have to work for them. This game will come down to a battle in the trenches.

Is this the game that Jake Rudock will finally connect on a deep ball? It’s been frustrating to watch Jehu Chesson run down the field wide open for five games with Rudock unable to hit him. Let’s assume they worked on this in practice and have one in the chamber.

Northwestern cornerback Matthew Harris deserves some respect. He leads the Wildcat defense with three interceptions, one of them going for a touchdown. He’s also contributed six pass breakups. This name may sound familiar, as Harris notched his first career interception versus Michigan last year.

Cornerback Nick Vanhoose has held down the other corner with five pass breakups. Vanhoose, along with the other members of the secondary, is holding opponents to 130 yards passing per game. Northwestern has five total interceptions and nine sacks.

Northwestern’s hostile defense will require Rudock to be error free this game, which is unlikely given his turnover numbers. And if Michigan is going to get ahead, they need to do something they have yet to do this year- complete a big play on the deep ball. The Wildcats have allowed only two passing touchdowns and Rudock has yet to prove he can make the big play passing.

They may be young, but Northwestern’s run game is effective. Sophomore running back Justin Jackson has over 100 yards in four of five games, totaling 636 yards and one touchdown. He has breakaway speed and the ability to run between the tackles.

Michigan’s defense must stay disciplined facing freshman quarterback Clayton Thorson. Thorson has the ability to hurt a defense with his feet, and Michigan has had issues with running quarterbacks in the past.  Already rushing for 200 yards, he has also scored four touchdowns.  Northwestern averages 248 yards rushing per game, which is good for 12th in the country.

Michigan has held its opponents to 71 yards rushing per game, but this will be the first game without a key piece. Starting buck linebacker, Mario Ojemudia, went down with a season ending Achilles injury against Maryland. Senior Royce Jenkins-Stone will step in and try to fill Ojemudia’s shoes. Both have played this season, but Ojemudia was clearly the preferred option. Ojemudia was third with 19 tackles, and second in tackles for loss with six.  Backup Lawrence Marshall should finally see significant snaps, as well. 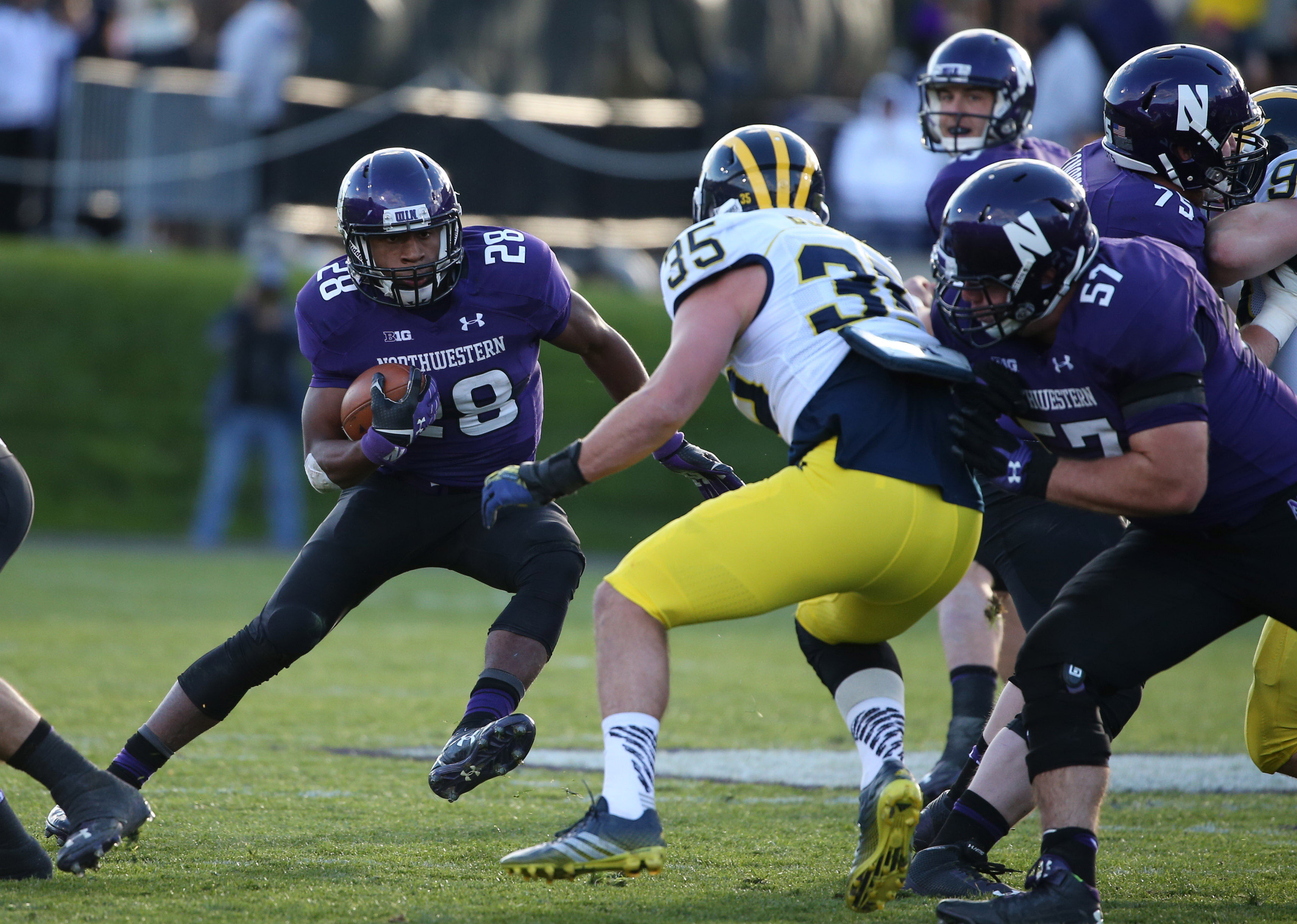 Now for the good news: Matt Godin, Chris Wormley, and Ryan Glasgow are all still on the team. If they can keep up their stellar play, it should leave plenty of room for the linebackers to clean up any runner that gets past the line of scrimmage.

The Wolverines rank 2nd nationally in total defense. Losing Ojemudia is significant, but Jenkins-Stone and Lawrence Marshall are both serviceable. Northwestern has done some damage on the ground this year, but defensive coordinator DJ Durkin should have enough tape to put together a scheme that will limit their yards gained.

Northwestern has done a majority of their damage on offense with the running game. Not to say that passing is an afterthought for the Wildcats, but it’s not their best option. Averaging 142 yards per game through the air, Thorson has eclipsed the 200-yard mark only once. He has thrown for four touchdowns and three interceptions.

Jourdan Lewis is as impressive as any player in the country. His lockdown cover skills have allowed Durkin to be aggressive—and more creative. Expect a few more wrinkles to be added in an effort to confuse the inexperienced Thorson.

Cornerback Channing Stribling was back at practice this week and will be a part of Saturday’s game plan.

Michigan excels in pass coverage while Northwestern struggles with their passing attack.  If Northwestern wants to win this game, they will have to do so with their running game.

Backup running back Soloman Vault handles the kick return duties for Northwestern. He can and will break loose, if given space. Not as feared as Maryland’s Will Likely, but just as dangerous. He averages 31 yards a return.

Jack Mitchell brings a solid kicking game. He is 10 for 13 on field goals with a long of 49.

Michigan’s special teams units may be a bit underrated. They are disciplined and well coached on coverage teams, and do seem to take pride in their jobs. On top of that, kicker Kenny Allen has been trustworthy.

Northwestern and Michigan both have solid special teams. This part of the game should factor into the final score, especially the field position battle. The leg of one the kicking specialists could be the difference in the score.

Since Fish was spot on last week with his 28-0 prediction (he had to have someone help him), I’ve enlisted some help this week from my friend Ashley. Using a simple formula, we came up with this prediction: