With plenty of movement in the class over the last few weeks, the 2019 Michigan football recruiting class is at 24 current commitments with some big-time targets remaining on the board. Emphasis on the “big” because the majority of Michigan’s targets are some absolute monsters.

The average size of the five largest targets remaining on Michigan’s board is 6’4.5″ and 278lbs. The group includes three five-stars and two mammoth offensive tackles.

Take a look at the five MonStars left on Michigan’s board:

Crouch is the smallest of the bunch but as a two-way player, his athleticism at his size will cause give nightmares to both offensive and defensive coordinators. Question is, who will it be for? Michigan was said to be in the driver’s seat following his visit for the Penn State game but a return trip to Clemson the following weekend for an official visit looks to have swung things towards the Tigers. In-home visits will be huge here but distance may end up being too big of a factor here. 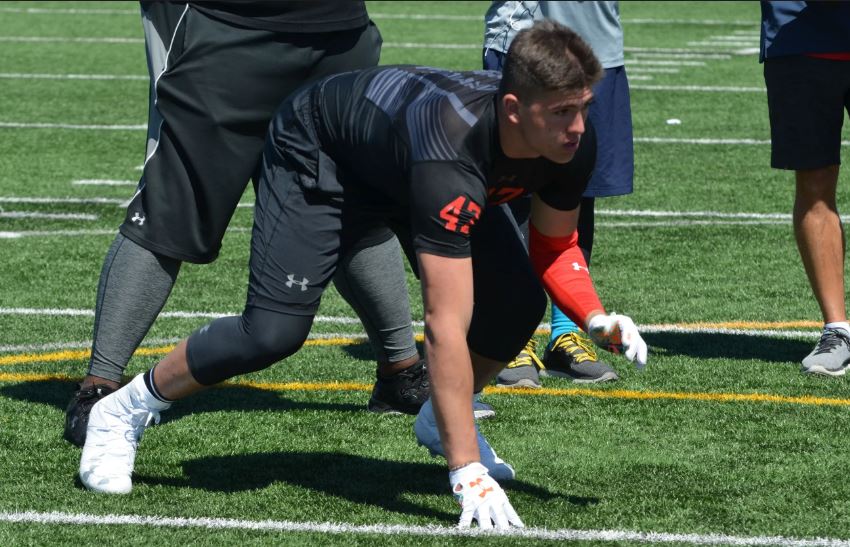 Karlaftis was the hottest name on the Michigan recruiting front while the Jeff Brohm to Louisville rumors ran rampant. But the speculation was all squashed when Brohm announced his plans to stay at Purdue and spurn his alma mater. With that decision, it looks like any chance of Karlaftis ending up at Michigan have pretty much gone out the window. According to multiple reports, Michigan has already made an in-home visit with the five-star defensive end but barring something drastic, Karlaftis will sign with the Boilermakers.

Harrison is the top ranked player on the staff’s board and arguably the player with the highest ceiling in the entire class thanks to his ridiculous size and athleticism combination mixed with some extremely long arms. He’s still pretty raw and has plenty of room to grow but he’s pretty much exactly how you’d create a defensive end in a video game. But where will he play his college ball? Michigan had all of the momentum heading into The Game but the blowout looks to have sent some waves through his recruitment. That was expected after a loss like that but it doesn’t look like it’ll be enough to keep him home. This one is obviously one to watch extremely close over the next three weeks.

Keegan has been a top target for the staff from the get-go. As a man-child throughout high school, he’s been a wanted recruit by most of nation but his family’s ties to Michigan and the Metro-Detroit area has been a big reason why the Wolverines have sat at/near the top of his recruitment throughout. Georgia is the biggest threat here and a real one at that but the familiarity with Michigan, the ties to the state, proximity to home, and the chance to play early may win out here.

Jones is the biggest of the bunch and one of the biggest in the entire class. At 6’8” 360lbs, he’s also a standout on the basketball court. That mix of athleticism and pure mass is beyond intriguing and it’s shown as a who’s who list of CFB programs have offered over the last couple weeks. Michigan’s offer was a big one for the Midwesterner but room in the class could be the biggest deterrent here. USC and Oregon may be the teams to watch here for the big man. Though, if Michigan either misses on Trevor Keegan or wants to add a second lineman, they could push for him prior to signing day.

No matter which remaining targets end up signing with the Wolverines, this is a class full of monsters and will be one of the most impactful of Jim Harbaugh’s tenure to date.