This is a recurring post where I cover the food, atmosphere, fans, and beer of each city I visit for a Michigan away game. The goal for this is to provide a deeper look on the game-day experience at each college town, as well as tips for anyone else making a trip to the city for future games.

Chicago —> West Lafayette is a breeze. Hop on I-90E until you hit I-65 S and you’ll be there in about 2.5 hours. Leaving at 5pm on Friday continues to be the stupidest move I seem to always make on out of town drives, as the Chicago traffic out of the city you’ll hit is all there will be. 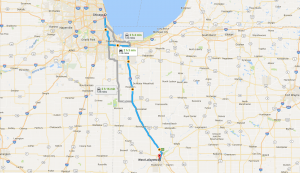 It’s a pretty flat, easy drive. Trucks on I-65 S have the weirdest tendency to drive in the left-lane, which may drive you slightly crazy. You will pass what I assume is a world’s largest cattle farm, since you will smell it a good 10 minutes before you even see it. I was convinced the road itself was constructed from manure, it was that rough. If you’re looking for the Indiana experience, you’ll get it!

Once you get to West Lafayette, it is DARK. And I mean the, “am I in the right town” kind of dark. The roads in general are laid out pretty haphazardly and I found them pretty tough to follow even with GPS due the winding nature of the roads. There is also a fair amount of construction within the city itself, but most roads were well-maintained.

The Night Before – Irish Pub

My better half and I arrived in West Lafayette just before 9:00pm Friday night at our Airbnb. We checked in, got settled, and headed out for a late dinner. After looking at some different options on yelp, we landed on Nine Irish Brothers, a traditional Irish Pub. The bar was about 80% Purdue / 20% Michigan people. Didn’t seem to be a big college kid hangout, but had a bit of buzz about it with plenty of people that seemed to be back for homecoming.

For drinks, we went with a flight that had an array of Guinness beers as well as a local Irish Red from local spot Peoples Brewing Co. that was excellent. We had actually planned on going there for dinner, but they closed at 9:00pm, which actually applied to most restaurants and that time on a Friday night. Glad to have gotten to taste one of their beers, though.

Food-wise, we had to go with some traditional Irish food, so we got Bangers & Mash and the Shepherd’s Pie. Both were fantastic with large portions. We went back to the Airbnb for a relatively early night and I swear, man, it was the best bed I’ve probably slept on. +1 to you, Airbnb host. 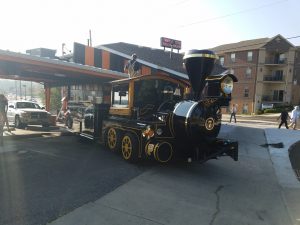 I always thought the creepy, nightmare fuel Purdue Pete guy was their official mascot, but nope! Side-note, I randomly saw “IT” last night, and I’m really surprised I didn’t have a bad dream where Pennywise transformed into Purdue Pete with his deadpan stare right in my face.

Anyways, after a 20 minute wait, we got a seat inside. This spot has been featured in Diners, Drive-ins and Dives for their “Duane Purvis All American” burger, which is a traditional burger except for the fact that they PUT PEANUT BUTTER ON IT. It really didn’t sound great at 9:30am, so we went with more traditional breakfast options. They’re also really well known for their root beer, so of course all of their soda machines were broken that morning. I got the Triple XXX Special, which was eggs, toast, bacon, and hashbrowns. I give it a solid B+. The lady got the short stacks, which is a just a mound of pancakes. It was extremely cheap and excellent portions for the price.

We read some suggestions on parking / things to do before the game and decided to park over on Main Street across the river in Lafayette to check out a few spots. We had plenty of time to explore a bit before lunch / drinking in the afternoon. Nothing was really open until 11:00am, so we walked around Lafayette a bit. I would equate downtown Lafayette to a smaller, ghost-town version of Ann Arbor’s Main Street…but with about 7 churches surrounding it. We strolled around for about an hour until the interesting places started to open up.

Look at this good boy. pic.twitter.com/aQlDpNjRuZ

I found another good boy. pic.twitter.com/Z2qLVIAMO8

As you can tell, we really didn’t have much to do.

We decided to check out Lafayette Brewing Co. right on Main Street. This spot filled up quickly with Michigan fans who made the road-trip that morning. By the time we left an hour later, it was about 75% Michigan fans. We went with two flights, which were 4 5-ounce pours and pretty cheap at $6. All 8 beers we tried were pretty interesting, but none really wowed me. My personal favorite was the Tippecanoe Common Ale, which was a really hoppy Amber Ale. I’d recommend this spot for any craft beer fan.

Second flight @LafBrew! Drank the first one too fast to think of a picture! pic.twitter.com/jZ4pTAuPQq

It was getting closer to game time, so we crossed the river and stopped by two bars on the way to the stadium: Scotty’s Brewhouse & Brother’s Bar & Grill. Neither really blew me away, but they had tons of TVs and a good enough beer selection to tide me over. 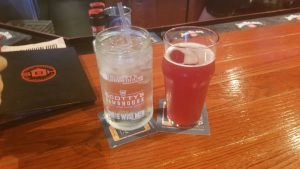 The Atmosphere – Everyone is Drunk

We headed over to the stadium for the game and saw a good number of people with quite a bit of drinks in them. The weirdest thing we saw was that everyone aged 21-25 had a costume on and a belt holding anywhere from 1 to 5 plastic cups on their waist. Apparently, it’s part of their Breakfast Club festivities. Everyone wakes up at 6:30am, throws on a costume, goes to bars in West Lafayette, and if you have these cups, each beer is like $1.50 if you have one of those cups.

Hoooooooooly cow was it hot. We got inside the stadium, found a spot in the concourse, and sat down for about 30 minutes. I wanted to get there early to watch the warm-ups, but I severely under-estimated the heat.

Best Decision of the Weekend was buying a souvenir cup. For $8 you get free refills all game of any soft drink of your choice. Given the heat, Powerade was the only way to go. We must have filled this thing up 5 times. Credit to Purdue, they had 4 or 5 giant water stations in the concourse for people to refill their water bottles, which was absolutely necessary all game long.

Seating was bleacher style and pretty tight. A few students came in about ten minutes after kick-off right in front of us; one of the ladies in the group had clearly enjoyed the Breakfast Club. She talked to us for about 15 minutes and after being very friendly and asking us where we grew up for the fourth time, she randomly turned hostile and her friends promptly decided it was time to leave. It was an interesting time.

Some other Purdue fans around us were pleasant, but ready to talk some trash if we spoke up. They were respectful, but definitely tense and more passionate than I ever thought Purdue fans could be. For the game itself, check out Garret’s recap. I really enjoyed the fact that they chant “IU SUCKS” after every Purdue kick-off. I have nothing against IU, but it was fun, so I absolutely partook.

This is from a different game, but you get the point:

After the game, most Purdue fans wished us Michigan fans luck for the rest of the season. I was pleasantly surprised and was expecting a bit more hostility on their end.

After a long, sweaty, stressful game, ice cream seemed like the best option after the game on the way to the car. I’ll link the Silver Dipper website, but it’s barely functional. They have a fantastic selection of unique flavors that all looked tasty. They sell a thing called “The Mini-Monster”, which is mini scoop of literally every flavor they have. Since I wasn’t specifically looking to get diabetes, I just got two scoops, and it was probably a good call.

It was a pretty long walk back to the car in Lafayette, but by the time we got on the road again, we ran into no traffic whatsoever and said goodbye to Indiana with the farm stench pushing us to speed a bit on our way out.

No complaints here. Everything I had was solid and affordable. Nothing really blew me away in either the food or drink department. I enjoyed the flights and a lot of the food over the weekend, but nothing wowed me. I will admit, if I had the peanut butter burger, it likely would have either dropped that B+ to a B- or moved it to A. Would have been a wildcard, for sure.

Going to Lafayette in the morning may have been a mistake, since it seemed like everyone in the city was at the Breakfast Club. I would still expect more to be going on in the city. Overall, most people seemed more interested in alcohol than the actual game, which really makes sense for Purdue fans.

Bonus points to Purdue for the endless Powerade and refill stations. It felt pretty cramped despite being a relatively small stadium, but people seemed to randomly leave during the game, which definitely cleared some space for us. It was really rowdy on opening kickoff, but that was by far the loudest point of the game. Overall a decent stadium with good views, but nothing too special.

Airbnb is the way to go. Hotels for random weekends during the football season will run anywhere from $125 to $150 per night. We paid $49 for a night at a nice PhD student’s apartment. He provided bananas and some Keurig Cappuccino in the morning. What more can you ask for? Everything is so close around there that we only had a 10 minute drive no matter where we wanted to go.

If you don’t mind walking a bit, parking in Lafayette will allow for an easy exit. You’ll pass quite a few spots to eat / drink on the way and you’ll have an overall good time. They do have a couple lots right in West Lafayette, but those are $10 for the day and you definitely will experience traffic on your way out. I have a weirdly strict “no paying for parking” rule on game days, so I elected for the far away option.

West Lafayette is limited in what you can do, but there are a couple gems in the city. It’s an easy drive with lots of drinking options. Tickets will always be relatively cheap since it’s Purdue, plus you’ll always have a decent view since it’s a smaller stadium. With Michigan not having another trip to West Lafayette on the schedule, I was glad I got to check this one off of my “Big Ten Stadium” bucket-list. This will probably be the least exciting of the 3 trips I’m taking this year. It’ll only get better @Indiana, and the final trip of the season @Wisconsin will be without a doubt the highlight of the season for the MGoFish Roadtrip.

Let me know what else you want to hear from this segment and feel free to leave any West Lafayette questions in the comments!

Elsewhere
Stephen Osentoski
Video Specialist at MGoFish.com
Grew up in Monroe, Michigan. Spent my college years at the University of Michigan, now living in Chicago. Developing software by day, creating videos by night.