After pummeling Rutgers by nearly 80 points in front of 200+ recruits, it’s safe to say this is a good week for Michigan football and its recruiting staff. That’s especially true thanks to the perfectly timed, mid-season bye week that will allow the staff to get out on the road and focus on their top targets. And Jim Harbaugh already has his number one target in mind.

During the mid-season bye weeks, college coaches normally take some time to hangout with their family. knock out some chores and, or course, recruit the hell out of their top targets. And Jim Harbaugh is no different.

With his chores done, Harbaugh is ready to hit the road with his eyes on one specific recruit: the nation’s #1 player, Antioch (CA) RB Najee Harris.

According to Ron Kroichick of the San Francisco Chronicle, Harbaugh is expected to visit Harris this week for his game. But that’s not all that came out from the article as Harris also put some doubt in the minds of the Alabama faithful:

Let’s say this: My mind isn’t set on Alabama,” Harris said. “I’m not 100 percent set on Alabama. I’m trying to see what else is out there for me. I’m using my visits to see. As much attention as I’ve gotten, I feel like I have helped my teammates get some offers, too.”

But, question is, was he being honest or were his words misconstrued?

According to his mother (via 247Sports’ Hank South), it looks to be the latter:

That was news to all of us,” she said. “So what he says – because he is getting tired of the recruit talk – when he’s asked if he’s committed to Alabama, he says I’m committed to Antioch (his high school). He came home last night to me and said, ‘Did you see what was put out there?’ and I’m going yeah but I had to check with you. He said, ‘No I didn’t say anything like that.’ I know how he talks; whoever he talked to probably caught him saying, ‘I’m not thinking about Alabama right now, I’m thinking about Antioch.”

To add to the visit story, Wolverine247’s Steve Lorenz is hearing that Harbaugh may be accompanied by Jay Harbaugh and Tyrone Wheatley, and are going in with plenty of confidence, thanks to Harris’ visit for the BBQ ($).

At this point, I hate myself for doing it, but my optimistic side is starting to shine through on Michigan’s chances with Harris. Though I’m not close to put in a Crystal Ball flip just yet, I’m starting to feel better about Harbaugh’s chances to sign the #1 player in the country in back-to-back years.

As for other visits that are expected to happen during this bye week, Lorenz told MLive’s Matt Wentzel that the Michigan staff is expected to see the likes of 2017 Kennedale (TX) OLB Baron Browning, IMG Academy (FL) C Cesar Ruiz and LB Jordan Anthony, on top of, pretty much, every other top target.

Regardless of the issues in the past, the Fab Five is a pillar of Michigan athletics. It’s one of the most culturally impactful moments in the history of college athletics and it’s only right for Michigan to use it to help sell their programs to both recruits and fans. And the UM football staff knows that well. That is why they’ve pushed the “Fab 25” in the 2016 class and are now pitching the nation’s top 2017 offensive line recruits to be a part of “the new Fab Five”. 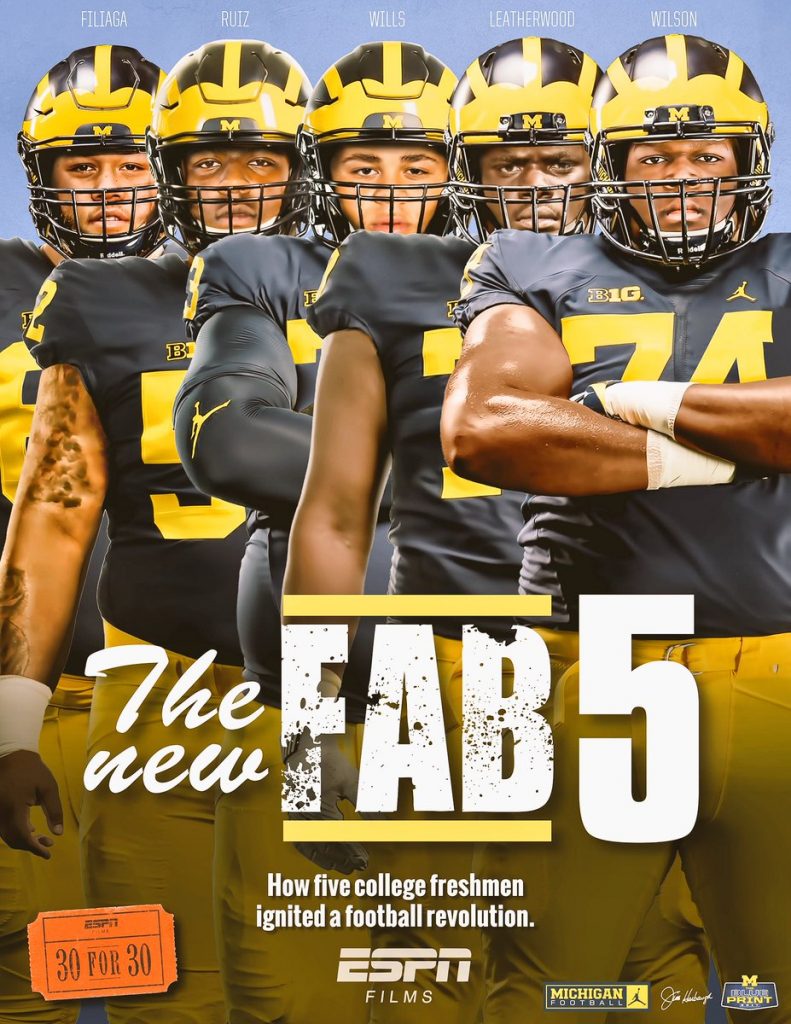 While landing every member of that wanted five is a reach, there are two players I have my Crystal Ball predictions in for to Michigan. Cesar Ruiz is the one I, and everyone else, feels the best about. But the next name on my confidence list is Poly Prep (NY) OL Isaiah Wilson, as he looks destined to join the Wolverines.

Wilson spoke with Scout’s Josh Newkirk about his interest in Michigan and the chance at UM landing the Fab Five ($):

Thanks to the longtime prioritization, multiple visits (including the BBQ), and, now, the pitch to sign five of the best offensive line recruits in the country, Michigan is in fantastic shape. My Crystal Ball is on the Wolverines and I don’t plan on moving it.

But Wilson isn’t the only elite member of the Fab Five that Michigan is looking better and better for. That includes the highest ranked player in the class, Pensacola (FL) OT Alex Leatherwood, who has been committed to Alabama since June of 2015 but it looks like that pledge may be wavering just a bit.

Leatherwood spoke with Scout’s Chad Simmons about his recruitment and where things stand after his official visit to Ann Arbor ($):

I would say things are a little different since I took that visit,” said Leatherwood.  “I am still committed to Alabama, and things have not changed that much, but I do see I have other good opportunities.

“The strength of my commitment is a little less than what it was, but I do still feel good about it. I am a little more open to schools now than I was, but I am still committed.”

He also went on to mention his plans to visit Michigan once again before he signs his LOI to “get even more of a feel of things on my own time.  I would like more time with the coaches, to see things again, and just see if there anymore questions I need to get answered”.

Clearly, Michigan made a big move with the five star offensive tackle. Like his fellow Alabama commit, Najee Harris, I’m not ready to put in a flip prediction but I am feeling much better about Michigan’s chances to eventually sign the five star.

Looking for some more positive five star news on the offensive line recruiting front? Ask and you shall receive.

Another highly rated member of the Fab Five is starting to gain a lot of momentum on the trail for Michigan. That is Lafayette (KY) OL Jedrick Wills, who also visited for the Wisconsin game.

Wills looked like a lock to Alabama going into the visit but that doesn’t look to be the case anymore. There have been multiple reports mentioning Wills being one of the players that Michigan made the biggest move for during the trip. And now Scout’s Allen Trieu has added Wills to his latest 2017 Michigan recruiting class prediction ($).

I’ll need to see/hear/read more to add him to my BGRC but Trieu is one of the best in the business so this is obviously something to watch closely.

The five star tackle recently spoke with Allen Trieu (via The Detroit News) about his recruitment and why Michigan is making a move:

With Michigan, the program overall is intriguing and the type of legacy they’ve got there,” Jackson said. “I definitely want to see what they’ve got going on.”

Jackson said he’s planning on officially visiting Ann Arbor this year, which is huge for UM’s chances. While USC and Arizona State are the favorites right now, Michigan proved its ability to sway recruits (elite offensive lineman, especially) during their official visits. So, if Michigan can lock down that official visit, it’s likely the Wolverines make a move for Jackson.

At this point, here’s my prediction on how Michigan’s offensive line haul will finish out:

As for the other top targets: