With the spring break trip in the past and the Michigan football team back in Ann Arbor, 2017 recruiting should really begin to pick up. The staff is expected to host a slew of top recruits over the next month which could very likely return a couple commitments.

Visitors to Keep an Eye On

At this point, nothing is guaranteed. But that doesn’t mean something couldn’t happen. Michigan will host a couple names to watch closely during their upcoming trips, including:

Benjamin will be on campus alongside his running backs coach for the majority of Tuesday and though he’s mentioned multiple times that a commitment is not off the table, at the least, I do believe Michigan will be his outright favorite by the time he leaves Ann Arbor.

I should have an update with him soon after his visit and see how everything went.

According to Wolverine247, Singleton will be joined with his teammate DL Corey Bolds for a visit to Michigan on March 24th ($). Both Paramus Catholic standouts have looked to favor the Wolverines for quite sometime however it’s not a done deal like some may have thought early on. Clemson and Alabama both look to be real candidates for both though the official addition of Rashan Gary may have given UM the upper hand moving forward.

While I doubt either make a decision, Singleton is the one I’d watch closest out of the two. He’s looked to be close to committing to Michigan a couple times in the past and a great visit this month could give him that pledging feeling.

According to Wolverine247’s Steve Lorenz, Hainsey is one of the top offensive line target on the board for the staff ($). He has the versatility to play almost every position on the line, especially tackle, which is a gigantic need in the 2017 class for UM. And now the staff will have their best opportunity so far to woo him as he’ll be making the trip up north for his 2nd trip in the last five months for the spring game.

There hasn’t been much talk about a possible commitment but with the staff making him a priority, the positional need there, and his familiarity to the region (from Western Pennsylvania), it’s something to watch. I’d be a little shocked if he ended it this early with other visits planned but believe UM could be his leader by the time he gets back to school.

For, what seems like forever, Michigan looks to be the favorite for Ruiz though he’s made it very clear on Twitter that he doesn’t have a “leader”, otherwise (like Rashan Gary said multiple times) he’d be committed. Though he may not have a leader, yet another trip up to Ann Arbor this spring could give UM another step up on the competition.

Like Hainsey, he’s a top target at a priority position. According to The Wolverine crew, the IMG Academy standouts would like to play together in college and one of the two has admitted a commitment isn’t out of the question ($).

The Elite of the Elite

Waiting longer than just about everyone, Michigan’s game of playing hard to get finally ended as the staff extended an offer (and another amazing edit) to the top linebacker in the 2017 class, IMG Academy (FL) LB Dylan Moses. 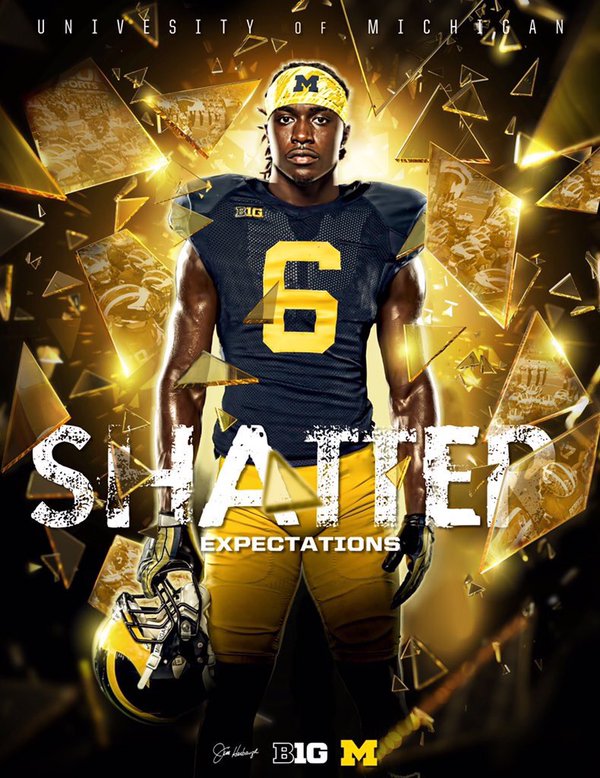 Moses, who committed to LSU in 8th grade and decommitted from the Tigers this past August, is one of the most well known and most offered recruits in the class. He landed his offer from Les Miles while in 7th grade and was seen as one of the best middle school players of all time. And I’m not joking. Check out this highlight tape:

And check out his ESPN: The Magazine story from 2013 (this is before his freshmen year of high school):

With this offer in hand, it would still be a huge shock to see Michigan ever land a commitment from Moses. However, according to Wolverine247’s Steve Lorenz, “the Wolverines are a potential factor going forward” ($). The staff will likely try to get him on campus for an unofficial or at least an official visit with some of his IMG teammates to try to really draw up interest.

Either way, UM looks to have a puncher’s chance thanks to the staff’s relationship-like approach to slow play Moses into truly showing how interested he was in Michigan. Touché, Harbaugh.

As for a Florida high school player that is also very high on the staff’s board but is much more of a realistic option at this point, American Heritage (FL) OL Tedarrell “TJ” Slaton made it known, yet again, that Michigan is a top team for him and he’s a top target for them.

Slaton spoke with Scout’s Chad Simmons about his recruitment and interest in Wolverines, which he also confirmed his unofficial visit to campus a couple weeks ago:

The American Heritage star also caught up with 247Sports’ Ryan Bartow at The Opening Miami regional camp and said Michigan is “a big contender”.

Slaton has named Michigan his leader twice in the past and with him being able to see Ann Arbor for an unofficial visit this early is big for UM’s chances. I’ve added him to the majority of my BGRCs and will continue to do so until further notice. I’m not sure there is an offensive lineman higher on the staff’s board.

Michigan recently extended an offer to another top player out of American Heritage high school in LB James Houston IV.

Blessed to say I received an offer from The University of Michigan✨#GoBlue 〽️ pic.twitter.com/WJAcPFw6nX

Houston is a tough prospect to get a read on. He told 247Sports’ Ryan Bartow that Wisconsin remains his leader, while he told Scout’s Corey Bender that no one is standing out at the moment ($).

As for me, he let me know how big of an offer Michigan was for him and how close he is with 2016 signee TE Nick Eubanks, who’s already putting his recruiting hat on:

On top of that, one of my sources let me know the definitely likes UM and they’ll have a good shot there.

It’s too early to really get a beat on his recruitment though another name to watch is his cousin and teammate DT George Ellis III.

I caught up with Ellis, who has yet to receive an offer from Michigan but said UM is one of the main offers he’s looking to add before making a decision. The staff is following him on Twitter which means they’re at least taking notice to the American Heritage standout.

If an offer comes his way, both Ellis and Houston could become legit options for this class.

While the two American Heritage defenders look to be toss ups at this point, a recruit committed elsewhere but is a name to watch moving forward is Brighton (UT) ATH Sione Lund.

Lund has been committed to Stanford since November but is a player the Michigan staff is clearly taking a run at:

Though Michigan was targeting and very interested in Lund before the addition of Tony Tuioti, the new recruiting coordinator could be a main factor in this recruitment.

Another name to watch is Lund’s good friend and another Utah standout, Westlake (UT) S Chaz Ah You. He landed his offer from Michigan back in October and has mentioned before how interested he was in the Wolverines. Add in him being at a high position of need and could be a top safety target moving forward.