Although Ellenwood (Ga.) Cedar Grove LB Elysee Mbem-Bosse has only played two seasons of football, he has garnered the interest of Alabama, Auburn, LSU, and many more power-5 level schools. On Sunday night, Mbem-Bosse, a 2016 linebacker, committed to Michigan.

“When I was talking to some of the people on campus, this one guy was telling me that no one expected Michigan to go to a bowl game and win it (before the 2015 season). When coach Jim Harbaugh came in, things turned around. When you do things like that everybody gets excited. It’s an amazing place to be at,” Mbem-Bosse said in an interview with MGoFish Monday afternoon.

At 8:23 last night, Mbem-Bosse was joined by Miami (Fla.) Columbus defensive end, Joshua Uche, in committing to Michigan. Mbem-Bosse and Uche have been friends for a long time and they decided on their official visits this weekend that Michigan was the best place for them. 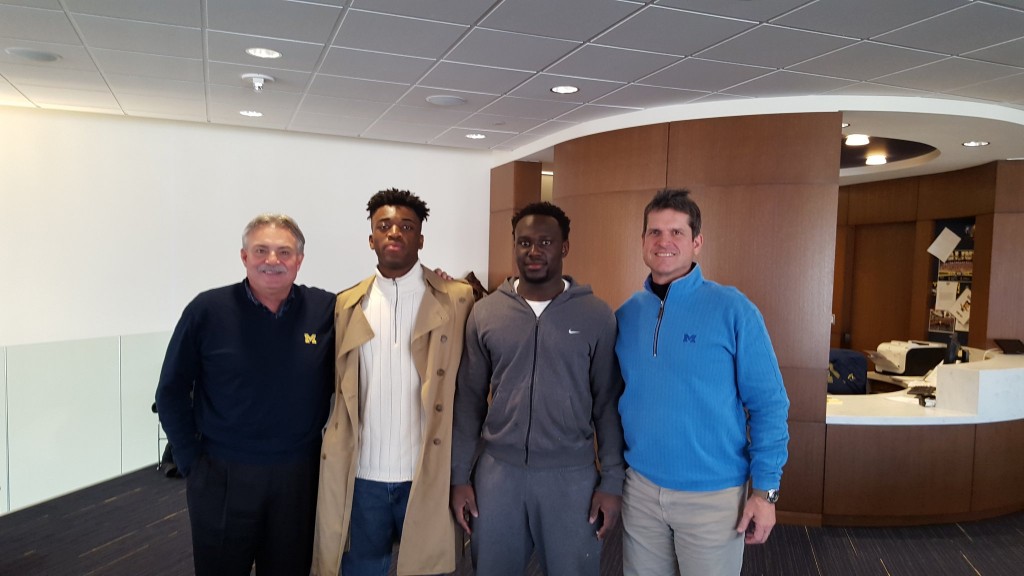 “He’s like a brother to me. When we were walking around and looking at the campus, we kept looking and smiling at each other. We both knew this was the place. I feel like most recruits that were there were all giving each other this look like ‘this is the place,’” Mbem-Bosse said.

Playing for Jim Harbaugh is something that Mbem-Bosse has envisioned since watching Stanford and the San Francisco 49ers’ turn arounds in the past ten years.

“I had dreams and goals to play for him (Harbaugh). He went into Stanford and turned them around, a lot of people forget about that,” Mbem-Bosse said.

Michigan fans can attribute Michigan’s heavy interest in Mbem-Bosse to new defensive coordinator, Don Brown. Brown made Mbem-Bosse his top target at Mike linebacker since his hiring in December.

“Coach (Don) Brown got more interested in me and I went up on their board as number one most needed. When I got a chance to sit down with him and he went over their defensive scheme with me, I loved it. Whatever (system) we’re playing in, we’re blitzing. I love it,” Mbem-Bosse said.

With Michigan losing linebackers James Ross, Joe Bolden, and Desmond Morgan, Mbem-Bosse has the opportunity to play as a true freshman. Brown was able to shed some light on early playing time.

“He (Brown) said that playing early is a must, it’s going to happen. He said that I was physically prepared,” Mbem-Bosse said.

Brown projects Mbem-Bosse to be the Mike linebacker of the defense and that involves knowing every bit of information in the playbook and making reads and communicating with teammates on the field. Getting to know the playbook is something that Mbem-Bosse takes seriously and plans on spending a lot of time doing once he arrives on campus in June.

“I’m going to be in that playbook day and night. I already told him if I have to sleep over at his house a couple times… We got to do what we got to do to get this thing rolling,” Mbem-Bosse said.

“I told him we have to whatever I need to do to get this playbook in hand. In the position that he wants me in is the guy that calls the plays. There’s going to be times people don’t get it and I have to be that voice on the field that makes sure everybody knows. I’m going to be in that playbook 24/7,” Mbem-Bosse said.

Mbem-Bosse has gotten to know and bond with Brown during his recruiting process and said it’s hard to explain what it’s like to know him.

“Coach Don Brown is an amazing guy. There’s no words to explain him. He’s a ‘down to the heart’ kind of guy, you’d love to be around him,” Mbem-Bosse said.

Mbem-Bosse will now turn his attention to recruiting other prospects to Michigan in the final nine days until National Signing Day. He said that Rashan Gary, Devin Asiasi, Boss Tagaloa, and Jordan Fuller will be his prominent targets.

Evan Paputa
Born and raised in Plymouth, Michigan. Primarily a writer for The D Zone, but will be guest writing for MGoFish in addition.
Latest posts by Evan Paputa (see all)