Michigan has made the wide receiver position by far one of the most prioritized positions in the 2016 class with 4-6 commits already on board that could play the position. But the staff isn’t done just yet. Paramus Catholic (NJ) WR Donald Stewart will be taking his official visit to Ann Arbor this weekend.

I was able to catch up with the three star receiver to talk about his upcoming trip and interest in Michigan but we first went over his most recent official visit to Palo Alto to see his other top team, Stanford.

“I had a great weekend. I had an opportunity to hang out with most of the recruits and speak with players such as (Christian) McCaffrey, (Bryce) Love, (Quenton) Meeks and JJ (Arcega-Whiteside),” Stewart said. “I knew academics was always important but they emphasized academics on this trip more than ever. One thing that stood out was the tour that we had on virtual reality. It was pretty cool to watch engage in all of the virtual reality activities”.

Stanford definitely left a lasting impression on Stewart and Michigan may have to make up some ground this weekend. Though he’s already visited Ann Arbor in the past, he’s hoping to see a couple different things on his official visit. 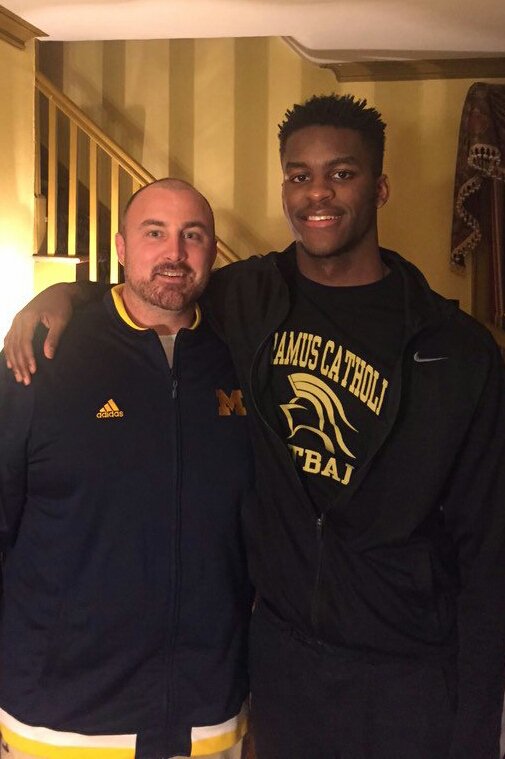 “Hopefully I can see more of the campus, spend more time with the coaches and hopefully learn more about the school and what Michigan has to offer.”

One thing that Michigan has going for them that no other program in the country has in 2016 is the strong connection to New Jersey which includes some of his best friends who will be making the trip to Ann Arbor with him this weekend.

“I think it’s a big factor. To play college ball with my bestfriend since 6th grade (Rashan Gary) along with Drew (Singleton) who I’ve grown up with since about 10, would mean a lot. I also wouldn’t mind playing with Jordan Fuller who I’ve grown close with this past summer,” Stewart said of his ties to the Garden State and who he’ll be visiting UM with this weekend.

Michigan’s strong New Jersey connection can be traced back to one coach specifically, LB coach Chris Partridge, and he also happens to be Stewart’s former head coach and one of his closest mentors.

“Extremely close.” Stewart said of his relationship with Coach Partridge. “He helped me transition from different high schools and has taught me how to compete at a new level”.

Though Michigan already has multiple receiver commitments in the class and will also be hosting another very possible addition to the class in West Orange (FL) WR Eddie McDoom, I really like where things stand with Stewart as well.

The Paramus Catholic standout let me know how much he loves Michigan and said he’s hoping to make a decision next week, which, if things go well on his visit, could end up giving the Wolverines their 5th commit out of New Jersey in the 2016 class.